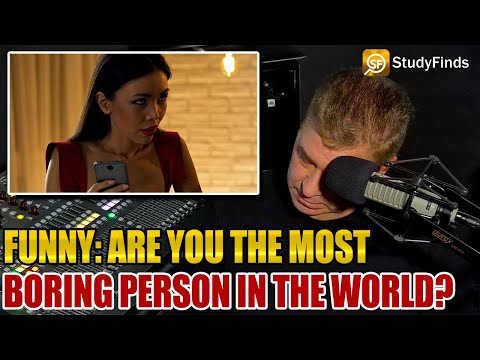 COLCHESTER, United Kingdom — The world’s most boring person may be the same person who handles all your finances! A new study examining the “science of boredom” has ranked the jobs, characteristics, and hobbies that people consider the dullest in society. That’s bad news for data analysts and accountants, who top the list of the most boring people around.

Researchers from the University of Essex studied more than 500 people across five experiments before crowning the blandest jobs and most boring personality traits and interests. As for hobbies that are sure to put your friends to sleep, results show people who enjoy religion, watching TV, bird watching, and smoking rank as the most boring individuals.

“The irony is studying boredom is actually very interesting and has many real-life impacts,” says Dr. Van Tilburg in a university release. “These paper shows how persuasive perceptions of boredom are and what an impact this can have on people.”

“Perceptions can change but people may not take time to speak to those with ‘boring’ jobs and hobbies, instead choosing to avoid them,” the study author continues. “They don’t get a chance to prove people wrong and break these negative stereotypes. The very fact that people choose to avoid them can lead to social ostracization and increase loneliness leading to a really negative impact on their lives.”

The study also found a surprising misconception about so-called boring people — which is that they’re less competent at their jobs. Despite this stigma, Van Tilburg says people who perform the “most boring” jobs also perform tasks which are vital in modern society!

“It was interesting to me to see the study showed that boring people were not seen as competent,” Dr. Van Tilburg says. “I would have thought that accountants would be seen as boring, but effective and the perfect person to do a good job on your tax return.”

“The truth of the matter is people like bankers and accountants are highly capable and have power in society – perhaps we should try not to upset them and stereotype them as boring!”

The study is published in the Personality and Social Psychology Bulletin.