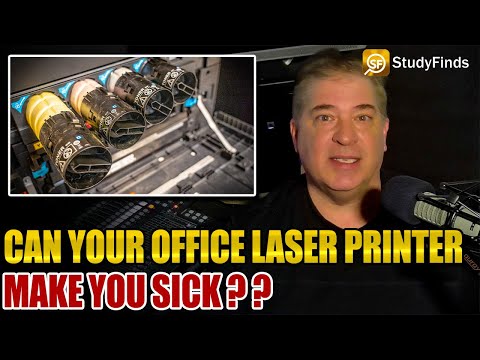 MORGANTOWN, W. Va. — Working in an office is supposed to be safe working environment, but appearances are often deceiving. In a new discovery that emphasizes just how hazardous seemingly benign modern equipment can turn out to be, researchers from West Virginia University have discovered that microscopic nanoparticles from laser printers may change an individual’s genetic and metabolic profile if inhaled. These changes can seriously increase one’s risk of cardiovascular and neurological disease.

Who knew your office’s printer could be so dangerous? The research team came to their conclusions after placing rat models into the same confined space as a typical laser printer. For a total of 21 days, the models stayed in the space for five hours daily, during which time the printer was running continually.

“It’s equivalent to an occupational setting,” explains study leader Nancy Lan Guo in a university release. “A rat’s life expectancy is about one or two years. In our life, that would be more like four or eight years of five-hour-a-day exposure.”

“The changes are very significant from day one,” she adds.

During the experiment, the rats’ lung cells and blood were habitually (every four days) examined in order to determine if their genetic makeup had been influenced by the toner. The examination was comprehensive; every single gene in the rats’ genomes were analyzed.

Among both rats and humans, if one’s genetic material is changed it can lead to serious problems with cellular protein production. Protein is, of course, essential to life. While most probably just associate protein with hitting the gym and building some extra muscle, our bodies would break down in a variety of ways quickly with no protein.

“We do everything because certain proteins function in certain ways,” Guo comments.

After just a single day of close exposure to the toner, the rats’ genes linked to metabolism, immune response, and additional important biological processes exhibited clear signs of disruption. After the full 21 days, clear genomic changes associated with cardiovascular, metabolic, and neurological disorders were observed in the rats.

Should companies do more to protect employees from laser printer exposure?

“I don’t want to alarm people,” Guo clarifies, “but special ventilation and exposure controls should be installed in rooms where laser printers are in heavy-duty use, because the concentration of nanoparticles released in the air during the printing and copying process is strongly correlated with the printing activities.

Pregnant women, especially, should be aware of these findings.

“In particular, there is one group I really think should know about this: pregnant women. Because once a lot of these genes are changed, they get passed on through the generations. It’s not just you,” Guo says.

Besides just the rats’ genes, metabolites present in their blood were also examined. Metabolites are  molecules produced by our bodies as we eat, and used as fuel. “Let’s say we eat something,” Guo says. “Where does the food go? It goes to metabolites. It gets absorbed. All these metabolites are involved in our function.”

There are thousands of varying metabolites in the human body. One is glucose, which provides energy, while another is oleic acid, which assists in fatty acid production.

The metabolic readings collected by the research team supported what they noted after assessing the rats’ genes; the same health risks indicated by the genetic disruptions were corroborated by the rats’ metabolic profiles.

Since the experiment involving rats, Guo and her team have also examined genomic changes seen among a group of Singaporean printing company workers. The workers’ genomes largely changed in the same ways that the rats’ did.

“And they’re very young. A lot of the workers ranged from 20 to their early 30s, and you’re already starting to see all of these changes.” Guo concludes. “We have to work, right? Who doesn’t have a printer nowadays, either at home or at the office? But now, if I have a lot to print, I don’t use the printer in my office. I print it in the hallway.”

The study is published in The International Journal of Molecular Sciences.