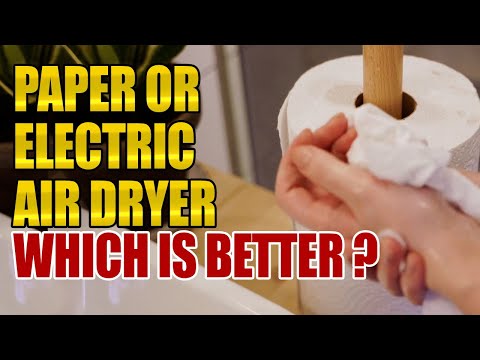 LEEDS, United Kingdom — Washing your hands regularly is a key way to stop the spread of germs. When it comes to how you dry your hands, new research led by Dr. Ines Moura from the University of Leeds says that step can be just as important to your health. Her study looked at how effective paper towels and air hand dryers were at removing viruses still on a person’s hands after washing.

Although both methods help cut the spread of viruses, paper towels were found to be 10 times more effective at keeping one’s hands from contaminating other surfaces than a dryer.

Four volunteers had their hands contaminated with a bacteriophage, a virus that infects bacteria and is harmless to humans. In a hospital bathroom, the volunteers then skipped washing their hands to simulate what would happen if a person didn’t properly scrub themselves clean. Then came the choice: paper towels or the electric dryer.

After using each method the volunteers left the hospital bathroom and touched 11 different surfaces, including doors, stairwell railings, phones, and even medical equipment. The study also tracked the viruses each volunteer spread on their clothes using a specialized apron. The team found that the contamination after using an air dryer was much worse on 10 of the 11 surfaces.

Every surface the volunteers touched after using an air dryer showed that bacteriophage microbes had been left behind. Only six of the 11 surfaces were contaminated after using paper towels. Among the surfaces that were infected, researchers found around 100 virus units after using towels, compared to around 1,000 after using a dryer.

When it comes to your clothes, air dryers continued to show they did an inferior job of removing germs. Volunteers who touched their clothes after crossing their arms were found to have contaminated their testing aprons. The chairs those subjects then sat in were also contaminated, showing even indirect exposure to germs was worse after using dryers.

“As public toilets are used by patients, visitors and staff, the hand drying method chosen has the potential to increase (using jet dryers) or reduce (using paper towels) pathogen transmission in hospital settings,” Moura and her team said in a statement.

The researchers warn that their findings are especially important because of the shift away from paper products in many public facilities around the world. As health officials work to stop the spread of COVID-19, the study insists the answer is paper.

“We believe that our results are relevant to the control of the novel coronavirus that is spreading at pace worldwide. Paper towels should be the preferred way to dry hands after washing and so reduce the risk of virus contamination and spread.”

The study was scheduled to be presented at the European Congress on Clinical Microbiology and Infectious Diseases before the event was cancelled by the pandemic.

Best Sleeping Bags In 2023: Top 5 Camping Staples Most Recommended By Experts7 hours ago