NEW ORLEANS — People who take the leap into parenting or who simply embrace the idea of having children are more likely to support socially conservative ideas, a new study finds.

The published analysis of more than 2,600 people across 10 different countries finds that individuals who are already parents tend to embrace conservative views on abortion, sex and immigration. The connection was further reinforced with archival data from 400,000 people in 88 countries which show conservative-leanings are strengthened as people have more children.

Even study participants whose feedback included positive interactions with children or optimism toward the idea of parenting were more likely to lean toward conservative opinions on social issues.

The Tulane University research challenges a common American political narrative: people become more conservative as they get older. When the effects of parenthood were controlled in the study, older people without children were no more conservative than younger ones. The embark on parenting alone was the more decisive factor.

“Becoming a parent may have psychological effects that you don’t expect,” says senior study author Damian Murray, associate professor of psychology at Tulane’s School of Science and Engineering, in a statement. “We commonly talk about how parents are going to shape their children’s attitudes, but we also need to acknowledge how simply having children shapes their parents’ attitudes.”

Adds corresponding study author Nick Kerry, PhD, a Tulane alumnus who is currently a postdoctoral fellow at the University of Pennsylvania:“Because socially conservative values ostensibly prioritize safety, stability and family values, we hypothesized that being a parent or being more invested in parental care might make socially conservative policies more appealing. Parental status and parental care motivation were robustly associated with social conservatism in many diverse countries, from Lebanon to Japan.”

The studies authors reiterated that the parenting-conservative link was worldwide and not just an American political phenomenon.

Previous studies have tied styles of parenting to conservative or liberal political leanings. Earlier this year, Carnegie Mellon University researchers found that being a “helicopter” parent could mean your child leaned conservative. While a “free-range explorer” style of parenting led to kids embracing a more liberal lifestyle later in life.

But this latest research published in the journal Proceedings of the Royal Society B suggests that adults who choose parenting may already lean to the political right. The study authors, however, do acknowledge that many parents who do not identify as conservative may reject their findings.

“This is, of course, a large claim, and large claims require large amounts of evidence,” he said. “We’ve now tested this possibility across multiple investigations and have tried to prove the idea wrong in innumerable ways. We’ve controlled for any variables we, or others, could think of that might account for the parenthood-social conservatism link. But the relationship remains. We’re currently doing further research to better understand all the diverse ways in which our parenting motivations manifest.” 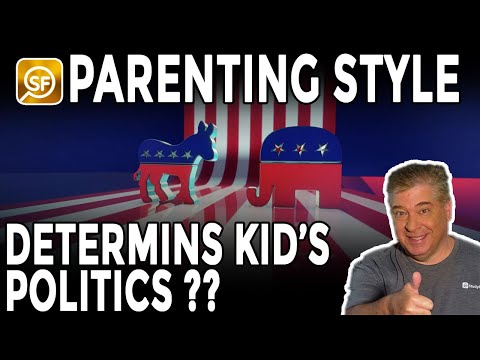