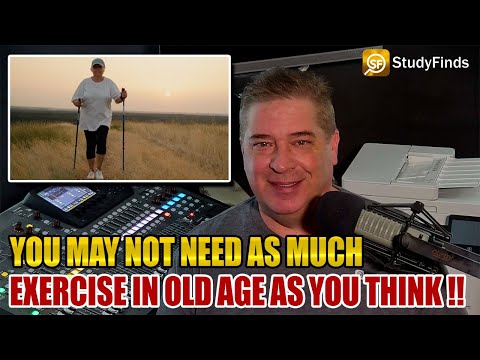 ‘We’ve always been told it’s good to exercise, but I think this is some evidence that exercise can actually change your brain.’

ATHENS, Ga. — Keeping your brain fit during old age may be as easy as keeping your body moving, a new study reveals. A team from the University of Georgia finds older adults who stay physically active see benefits in their cognitive abilities as they age. Moreover, their study shows that it doesn’t even take strenuous exercise to help the brain function better.

“This finding isn’t saying, ‘If you’re older, you need to go out there and start running marathons,’” explains lead author Marissa Gogniat, a recent doctoral graduate in psychology from the Franklin College of Arts and Sciences, in a university release.

“This is saying if you get more steps, if you’re moving around your environment a little bit more, that can be helpful to your brain health and keep you more independent as you age.”

Study authors examined 51 older adults, keeping track of their physical activity and cognitive health over time. Each volunteer completed a set of tests designed to measure their cognitive ability and underwent MRIs to examine their brain health.

Using wearable fitness trackers, researchers could monitor each person’s physical activity levels and the number of steps they took each day. The team also measured each participant’s fitness through a six-minute walking test.

“We’ve always been told it’s good to exercise, but I think this is some evidence that exercise can actually change your brain,” Gogniat says. “And that impacts the way you’re able to function in your daily life.”

How does movement help the brain work?

Study authors explain that our brains contain a collection of distinct networks. Those networks are constantly communicating with each other, sending information back and forth throughout the day. However, different regions of the brain are more active at different times. For example, one brain network that is active when the body is at rest essentially shuts off when a person is moving and trying to complete a task.

The team adds that if one of these networks doesn’t shut off while the other is active, it could be a sign that a person’s brain isn’t functioning properly. As people age, the basic tasks that juggle activity between these brain regions become more difficult to complete.

“This paper is exciting because it gives us some evidence that when people whose brain networks aren’t functioning optimally engage in physical activity, we see improvement in their executive function and their independence,” Gogniat reports. “We’re not saying you need to radically change your life.”

“Maybe just take the stairs on the way to work. Stand up and walk around a little bit more. That’s where you get the most bang for your buck, not crazy, high-intensity exercise.”

The findings appear in the journal Sport Sciences for Health.