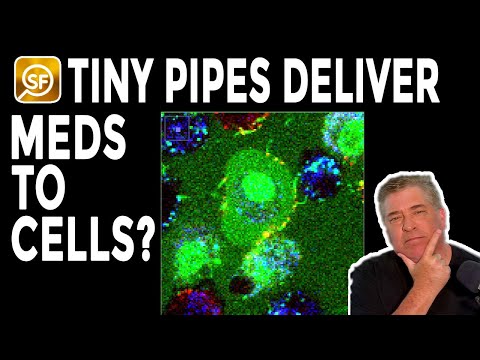 BALTIMORE — Tiny pipes a million times thinner than a human hair could one day deliver medicine straight to individual cells, according to new research.

A team from Johns Hopkins University says the “nanochannel” plumbing system could one day funnel drugs, proteins, and molecules to precisely targeted organs and tissues – without any risk of side-effects.

It consists of microscopic tubes that self-assemble and can connect themselves to different biostructures. Study authors engineered a way that ensured they are safe from infinitesimally small leaks.

“This study suggests very strongly that it’s feasible to build nanotubes that don’t leak using these easy techniques for self-assembly, where we mix molecules in a solution and just let them form the structure we want,” says Rebecca Schulman, an associate professor of chemical and biomolecular engineering at Johns Hopkins in a university release. “In our case, we can also attach these tubes to different endpoints to form something like plumbing.”

It’s a significant step toward creating the first network of its kind to combat a host of life-threatening diseases. Researchers are calling it the “world’s tiniest plumbing could one day funnel drugs to individual human cells.”

The team worked with tubes two million times smaller than an ant and a few microns long — equivalent to a dust particle.

They grew and repaired them, enabling them to seek out and connect to specific cells. It is similar to an established technique that repurposes DNA as building blocks. They make “nanopores” to control the transport of chemicals across lab-grown lipids that mimic a cell’s membrane.

However, short fittings alone can’t reach other tubes. The bio-inspired technology described in the journal Science Advances addresses these sorts of problems.

“Building a long tube from a pore could allow molecules not only to cross the pore of a membrane that held the molecules inside a chamber or cell, but also to direct where those molecules go after leaving the cell,” Schulman says.

“We were able to build tubes extending from pores much longer than those that had been built before that could bring the transport of molecules along nanotube ‘highways’ close to reality.”

The pipes could help doctors better treat and understand cancer

Due to the extremely small dimensions, the researchers haven’t been able to test whether they could transport molecules for longer distances without leaking or slipping through gaps in the “wall.”

Co-lead author Yi Li, a doctoral graduate, capped the end of a pipe with special DNA “corks” and turned on a faucet to make sure no water leaked out.

Li then ran a solution of fluorescent molecules to track leaks and influx rates. The glowing molecules slid through like water down a chute.

“Now we can call this more of a plumbing system, because we’re directing the flow of certain materials or molecules across much longer distances using these channels,” Li explains.

“We are able to control when to stop this flow using another DNA structure that very specifically binds to those channels to stop this transport, working as a valve or a plug.”

DNA nanotubes could help scientists gain a better understanding of how neurons interact with one another. Researchers could also use them to study diseases like cancer, and the functions of the body’s more than 200 types of cells.

Next, the team will conduct additional studies with synthetic and real cells, as well as with different types of molecules.