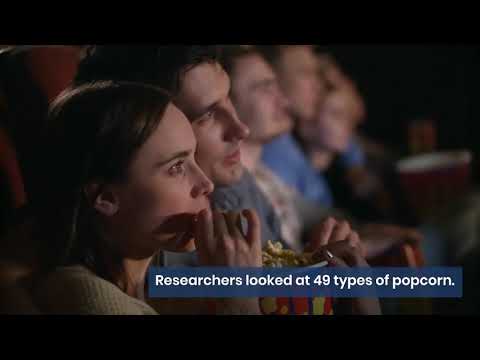 MARINGÁ, Brazil — Popcorn is one of America’s most favorite snacks. In fact, the country gobbles up about 15 billion quarts of the tasty treat each year. However, while a bag at the movie theaters will have nothing but perfectly popped, salty, and buttery kernels in them, how can you duplicate that popping perfection at home? A recent study looked at what it takes to make sure every kernel in your bag of popcorn actually pops.

When it comes to consumers, researchers at the State University of Maringá in Brazil say people are looking for a great seed-to-snack ratio. This means when the popcorn is done popping, there isn’t a whole pile of unpopped corn kernels at the bottom of the bag.

“The way kernels expand is a basic, yet very important characteristic of popcorn,” says researcher Maria Fernanda Maioli in a media release. Study authors refer to this as “expansion ratio.”

“Very hard grains burst when heated. This expansion multiplies the initial volume of the grains by more than 40 times. In the case of popcorn, it produces a unique and tasty food.”

What matters most when popping popcorn?

The study finds the biggest factors that influence popcorn’s quality include kernel moisture, expansion ratios, and popping ratios. The best quality popcorn has kernels which expand more when they pop. This popped corn also has a better texture and softness than others.

Whether you’re popping corn in the microwave or doing it old school on the stove, study authors find popping ability also depends on how well the starchy substances inside popcorn kernels transfer heat during the cooking process.

“We observed how this heat transfer inside the popcorn kernel relates to the expansion ratio,” Fernanda Maioli adds. “It allowed us to understand how other characteristics may also relate to expansion.”

The key to the best popcorn snack

Researchers looked at 49 types of popcorn. They all had different traits including grain yield, kernel length, expansion rate, kernel and protective layer thickness, heat transfer rates, and the amount of protein in the kernels.

“Our results showed that the thickness of the kernel’s outer layer is a key trait for selecting popcorn with greater popping expansion,” Fernanda Maioli concludes.

The team adds figuring out which traits have a link to expansion capacity will reveal which breeds of high quality popcorn pop the best. Finding which qualities are and are not key to making fresh popcorn will lead to a better tasting snack.

The study appears in the Agronomy Journal.

Is makeup making kids sick? Most U.S. children exposed to cancer-causing chemicals in cosmetics26 mins ago