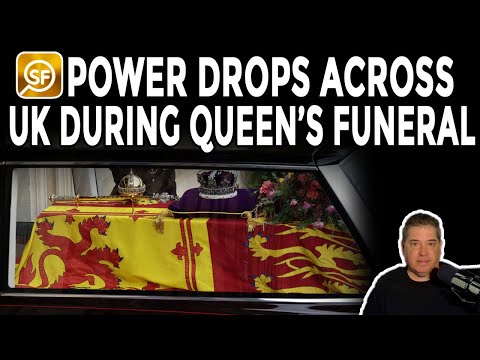 LONDON — A massive two gigawatt power drop — the equivalent of 200 million lightbulbs being turned off — was reported as millions in the United Kingdom switched from what they were doing to watch the funeral of Queen Elizabeth II.

Energy usage gradually increased by another 500 megawatts over the course of the Queen’s funeral as people started to resume their normal activities, such as making breakfast, according to the National Grid. But, during the two-minute silence, energy levels plummeted again, by 500 megawatts, as people stopped what they were doing.

“At around 10.30 a.m. people stopped what they were doing, [vacuuming] or whatever, to turn on the television which uses a lot less energy,” a spokesperson for the British energy company says. “It stayed around that level at the start of the funeral, but picked up another 500 megawatts as the ceremony went on because people will have got up from their seats to put the kettle on.”

Thousands of people traveled from all over the world to gather in Hyde Park to see the Queen’s final journey and funeral. Her coffin was placed in a hearse to be taken to Windsor Castle where she will be reunited with Prince Philip in a private internment service Monday evening. Not so green and pleasant: Satellite image shows Britain looking quite brownAugust 11, 2022 This nuclear-powered ‘flying cruise ship’ could stay airborne for years at a time, carrying 5,000 guestsJune 29, 2022