LOS ANGELES — The Ryugu asteroid is giving astronomers new insight into how the solar system looked like when it first formed. Mineral samples collected from the asteroid by Japan’s Hayabusa2 spacecraft are revealing that the substances come from chemical reactions with water billions of years ago — around the time when the solar system was relatively new.

Our solar system is approximately 4.57 billion years-old. Astronomers in the current study used a technique called isotopic analysis to identify differences in the mass of chemical elements within organic and inorganic compounds. They also applied a methodology using a “short-lived” radioactive decay system involving the isotope manganese-53 inside Ryugu to date the samples the Japanese probe collected.

The samples show evidence of carbonate minerals created through water-rock reactions. They estimate the carbonate minerals first formed as ice in the early days of the solar system — 1.8 million years into its existence to be precise. The carbonate minerals acted as a galactic diary that kept track of the temperature and composition of the asteroid’s aqueous fluid since its formation.

Ryugu asteroid is the first carbon-rich asteroid astronomers have collected samples from and studied with such depth. Unlike meteorites, Ryugu has not made contact with Earth, removing any potential contamination from our planet. Japan’s Hayabusa2 spacecraft landed on Ryugu on July 1, 2019, before dropping off samples in Australia in December 2020. Pure samples such as the ones taken from Ryuguu give a clear picture of how Ryugu formed and where it was made.

“The Ryugu samples tell us that the asteroid and similar objects formed relatively rapidly in the outer solar system, beyond the condensation fronts of water and carbon dioxide ices, probably as small bodies,” says Kevin McKeegan, a professor of Earth, planetary and space sciences at UCLA, in a university release.

How big is Ryugu?

Previous Ryugu studies that hypothesized the asteroid may have been a piece broken off of a larger asteroid or a small object less than 12.5 miles in diameter that eventually fused together into a larger object. The current findings that Ryugu’s carbonate minerals formed millions of years earlier refute these theories. Most asteroid accretion models suggest it takes a vast amount of time to accumulate mass and shape into larger objects — especially those that could survive space collisions over the past four billion years.

Ryugu currently stands at one kilometer in diameter because of collisions and reassembly throughout its existence. Astronomers suggest it’s very unlikely to have ever been a larger asteroid. One reason is that asteroids created when the solar system was still in its infancy would have heated to high temperatures from large amounts of aluminum-26. The decay of this radioactive nuclide would have melted the rock’s core and changed up the chemical composition of the asteroid. Ryugu shows no changes to its chemical and mineral composition and is similar to other studied meteorites considered chemically primitive.

Continued exploration of the materials making up the Ryugu asteroid can open up a window into the past of how the solar system, and even Earth, formed.

“Improving our understanding of volatile- and carbon-rich asteroids helps us address important questions in astrobiology — for example, the likelihood that rocky planets like can access a source of prebiotic materials,” adds Mckeegan. 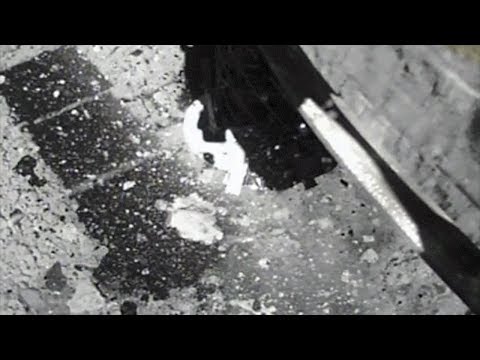