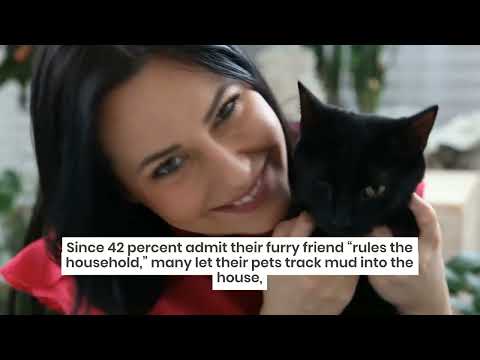 NEW YORK — It’s no secret pet owners can sometimes go overboard when it comes to treating their cats and dogs just like people. In case you needed more proof however, a new poll finds 22 percent share their food at the dinner table with their pets. One in 20 adults will actually jump in and take a bath with their furry companion!

The survey of 2,000 adults with a cat or dog also finds “kisses” are basically a requirement when it comes to owning a pet. A stunning 97 percent of respondents say they always let their pet lick (or kiss) them. Think our pets are staying on the floor while you watch TV? Think again. Two in three let their furry friends jump up on the couch. Nearly six in 10 (58%) admit their cat or dog actually has their own spot on the sofa.

The survey, commissioned by Vileda and conducted by OnePoll, also finds many pet owners realize owning a cat or dog can be a dirty job. Since 42 percent admit their furry friend “rules the household,” many let their pets track mud into the house, snuggle up with their kids, and even lick the dinner plates clean.

Four in 10 respondents believe their lives are less hygienic since getting a cat or dog. With that in mind, 43 percent add they’ve given up on keeping their home “germ-free.” Another 38 percent think their pets are messier than young children.

“People are very close to their pets, which is natural and understandable,” a spokesman for Vileda says in a statement. “However, it’s interesting to see just how close people are with their pets, and how this means owners are overlooking some of the unhygienic and germ-filled behaviors.”

“Just because you might not be able to see some dirt and germs doesn’t mean they aren’t there, so regular cleans are a must when you have pets – and making sure these cleans are quick and efficient means you’ll stay on top of it.”

The poll finds cats and dogs have no plans on giving up their cushy spot in your bed. The average pet owner says their companion sleeps in their bed four times a week. In fact, 44 percent admit their cat or dog climbs into their bed every night!

Nearly half the poll (49%) also let their pets sit at (or under) the dinner table so they can share meals with them. While six in 10 people have tried to stop their pets from doing “unhygienic” things, one in four confess they can’t resist the sad looks their pets give them when they discipline them.

As a result, many pet owners end up cleaning harder instead of trying to make their pet “cleaner” animals. The average respondent spends 44 minutes a week cleaning up after a pet. This includes vacuuming, mopping floors, and treating their pets for fleas. Fifty-six percent try to wipe their pet’s feet after every trip outside.

Unfortunately, in many cases, their homes still have that “messy pet” décor. One in five respondents (22%) feel embarrassed about the state of their home and how unhygienic it is because of their furry friend. Another 29 percent claim someone has told them their house has a “pet smell.”