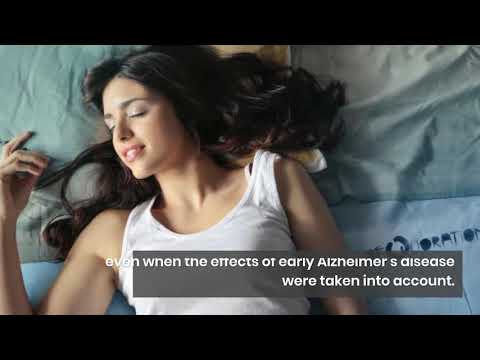 ST. LOUIS — We know that sleep plays a key role in how well we remember experiences and things we’ve learned on a given day, but what’s the right amount to optimize our brain power? Scientists say that when people find the “sweet spot” between sleeping too little and too much, they help slow cognitive decline, according to a new study.

In the study, 100 older adults were asked to provide samples of cerebrospinal fluid to measure levels of Alzheimer’s proteins. Each participant slept with a tiny monitor strapped to their foreheads for four to six nights to measure brain activity during sleep for an average of four-and-a-half years. The majority of participants had no cognitive impairments, with the average age being 75 at the time of the study.

Cognitive scores declined for the groups that slept less than four-and-a-half or more than six-and-a-half hours per night.

“It’s been challenging to determine how sleep and different stages of Alzheimer’s disease are related, but that’s what you need to know to start designing interventions. Our study suggests that there is a middle range, or ‘sweet spot,’ for total sleep time where cognitive performance was stable over time. Short and long sleep times were associated with worse cognitive performance, perhaps due to insufficient sleep or poor sleep quality,” says Dr. Brendan Lucey, associate professor of neurology at Washington University Sleep Medicine Center, in a statement.

“An unanswered question is if we can intervene to improve sleep, such as increasing sleep time for short sleepers by an hour or so, would that have a positive effect on their cognitive performance so they no longer decline? We need more longitudinal data to answer this question,” Dr. Lucey adds.

“I ask many of my patients, ‘How’s your sleep?’ Often patients report that they’re not sleeping well. Often once their sleep issues are treated, they may have improvements in cognition. Physicians who are seeing patients with cognitive complaints should ask them about their quality of sleep. This is potentially a modifiable factor,” says Dr. Beau Ances, a professor at Barnes-Jewish Hospital.

The findings are published in the journal Brain.

What’s the safest seat on a plane? Unfortunately it’s the least popular one11 mins ago