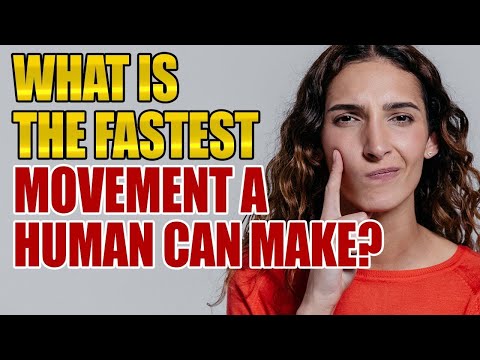 ATLANTA, Ga. — Think fast: what’s a motion you can make that’s even faster than blinking your eye? According to new research, a finger snap is the fastest movement overall in the human body.

Scientists at Georgia Tech reveal it takes just seven milliseconds to snap your fingers — more than 20 times quicker than the blink of an eye! The secret is down to friction between the thumb and third finger.

Experiments showed a rubber thimble produces too much, and a lubricated glove too little. But skin is just right. It produces just enough resistance and compression to create the perfect snap. Its cultural history dates back more than 2,300 years, spanning ancient art to the Flamenco dancers of Spain to modern superhero villains.

If you’re wondering why in the world scientists would even bother studying this? The authors say the findings could lead to better prosthetic hands, and more human-like robots.

“For the past few years, I have been fascinated with how we can snap our fingers,” says co-lead author Dr. Saad Bhamla, an assistant professor at Georgia Tech’s School of Chemical and Biomolecular Engineering, in a statement. “It is really an extraordinary physics puzzle that hasn’t been investigated closely — even though it is right at our fingertips.”

Diving head-first into the science and history of snapping

The snap of a finger was first depicted by Greek pottery makers around 300BC.

So how’d the authors figure out this fascinating finding? Using high-speed cameras, automated image processing and dynamic force sensors, the researchers covered participants’ fingers with different materials. They included metallic thimbles to simulate the effects of trying to snap while wearing a metallic gauntlet, much like Thanos.

The snap speed is a record for any part of the human body — almost three times quicker than a professional baseball pitcher’s arm. “When I first saw the data, I jumped out of my chair,” says Bhamla, who studies ultrafast motions in organisms from single cells to insects. “The finger snap occurs in only seven milliseconds, more than twenty times faster than the blink of an eye, which takes more than 150 milliseconds.”

When the fingertips of the subjects were covered with metal thimbles, their maximal rotational velocities decreased dramatically.

“Our results suggest Thanos could not have snapped because of his metal armored fingers,” says first author Raghav Acharya, an undergraduate student in the lab. “So, it is probably the Hollywood special effects, rather than actual physics, at play. Sorry for the spoiler.”

The analysis identifies a “diminished contact area” that exists between thimble-covered fingers.

Surprisingly, increasing the friction of the fingertips with rubber coverings also reduced speed and acceleration. A so-called “Goldilocks zone” was necessary. Too little friction and not enough energy was stored to power the snap, while too much led to energy dissipation. The fingers took longer to slide past each other, wasting the stored energy into heat. Mathematical models including a spring and a soft friction contact-latch confirmed the results.

“We included soft frictional contact into our mathematical model, and the results reinforced the central role played by friction in achieving ultrafast motions,” explains co-author Dr. Mark Ilton, of Harvey Mudd College in California. “This model can now help us understand how other animals such as termites and ants snap their mandibles, as well as rationally bioinspired actuators for engineering applications.”

Snap ahead to the future

The results open a variety of opportunities, including understanding why humans snap at all and if they are the only primates to have evolved the skill.

“This research is a great example of what we can learn with clever experiments and insightful computational modeling,” adds professor John Long, a program director. “By showing that varying degrees of friction between the fingers alters the elastic performance of a snap, these scientists have opened the door to discovering the principles operating in other organisms, and to putting this mechanism to work in engineered systems such as bioinspired robots.”

For Bhamla, the findings validate his fascination with this common motion. He says the study is only just beginning to scratch the surface of something that seems so simple, yet carries a much deeper meaning.

“Based on ancient Greek art from 300 BC, humans may very well have been snapping their fingers for hundreds of thousands of years before that, yet we are only now beginning to scientifically study it,” he says. “This is the only scientific project in my lab in which we could snap our fingers and get data.”

The study’s findings are published in the Journal of the Royal Society Interface.