DAVIS, Calif. — Ever wonder why sunflowers all eventually face the same direction? New research reveals the answer has much to do with the beautiful flowers’ name — and their need for bees.

Young heliotropic plants like sunflowers turn their heads back and forth to track the sun each day in order to gain more sunlight for photosynthesis. However, when they are mature, and the flower heads and stems become stiff and woody, this movement stops until the petals face the morning sun. Researchers have discovered that the flower’s main motive switches from growth to boosting their chances of reproducing more efficiently.

According to the recent study, mature sunflowers always face east to meet the rising sun in order to boost the chances of attracting more bees. In a series of experiments, the team changed the orientation of sunflowers by turning their pots around and noticed east-facing flower heads attracted a lot more bees than plants facing west, especially in the morning. The rising sunflowers are significantly warmer in the morning than west-facing ones, which brings an energy benefit to foraging bees early in the morning.

“It’s quite striking that they face east. It’s better for them to face east, as they produce more offspring,” says senior author Stacey Harmer, a professor of plant biology at the University of California Davis, in a statement.

The effects were controlled by the temperature at the flower head. When researchers used a portable heater to warm up the west-facing flowers, they were able to get similar results.

The study is published in the journal New Phytologist. 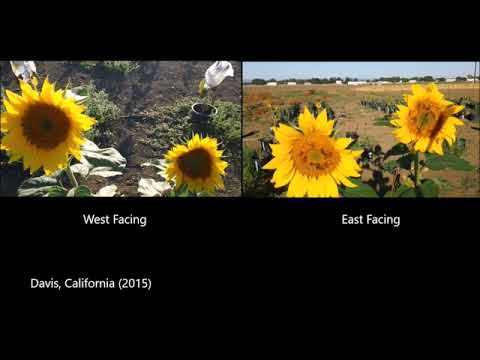