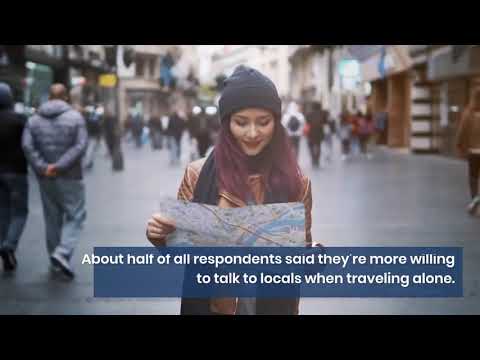 NEW YORK — If you prefer traveling solo, a new survey indicates you are — in one sense — not alone. A survey of 2,000 Americans reveal that nearly one in four (22%) adults exclusively travel by themselves and enjoy taking vacations alone.

This ratio of solo travelers is much higher than the researchers expected, revealing new attitudes toward work vacations and travel in general, according to the survey, which was commissioned by money exchange platform Travelex.

So, why are more and more people leaving their friends and family at home? Overall, the results of the survey indicate that Americans are much more likely to fully embrace experiencing another culture if they are traveling alone. In fact, 45% of respondents said that traveling with at least one other person “held them back” while on a trip.

Furthermore, about half of all respondents said they’re more willing to talk to locals when traveling alone. Forty-six percent said they feel more spontaneous traveling alone, and 57% said they consider themselves much more likely to consciously exit their comfort zone while traveling unaccompanied.

The survey also found that many Americans use their travels as an opportunity to make a romantic connection. One in 10 respondents said they’d found romance while traveling alone, while about 2 in 5 (42%) made a love connection, at least to some degree, while on a trip.

As for the top worries when it comes to traveling with others, most respondents agreed it was either being pushed into an activity they don’t want to do by a companion (53%), or being held back from enjoying an activity they’ve been looking forward to because their traveling companion or group isn’t on the same page (58%). Over a third of respondents said they’re concerned about themselves and their companions getting on each others’ nerves.

On the other hand, many adults have some concerns regarding traveling alone. The top two worries of would-be and former solo travelers was safety (52%) and loneliness (49%).

“In today’s world, it’s no surprise safety is a primary concern for travelers,” says Christine Buggy of Travelex. “Travel insurance can help provide peace of mind especially for solo travelers.”

The survey was conducted on behalf of Travelex by OnePoll.