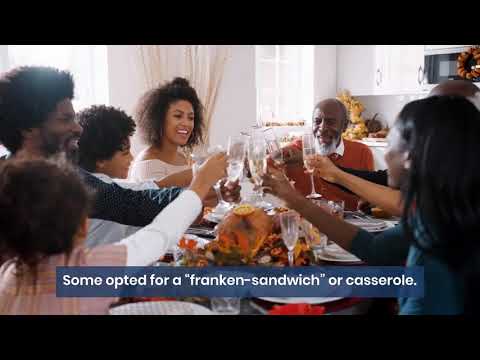 NEW YORK — Not finishing everything on your Thanksgiving plate? Good! More than two-thirds of Americans think Thanksgiving dinner leftovers taste better than the original meal.

In a recent survey of 2,000 respondents who celebrate Thanksgiving, nearly seven in 10 think a next-day Thanksgiving sandwich tastes better than that day’s fresh dinner. Half (49%) agree that the main course makes the best leftovers — more so than the side dishes (23%).

When it comes to traditional Thanksgiving foods, 62 percent believe turkey makes the best leftovers, while 46 percent opt for mashed potatoes and stuffing. While 45 percent think pumpkin pie is the best for leftovers, 38 percent also declared that it shouldn’t be eaten at any other time of year except the holidays.

Should stuffing be a year-round dish? People love their holiday meals so much, 35 percent usually eat them for five days or more after the initial meal. However, nearly two-thirds (65%) wish they could eat stuffing more frequently.

Conducted by OnePoll on behalf of Stasher bags, the survey also asked respondents about the best ways to repurpose Thanksgiving leftovers into new meals. Nearly two in three (63%) have created an old-fashioned “leftover” plate out of Turkey Day dishes they didn’t finish. Meanwhile, 38 percent have opted for a “franken-sandwich” or casserole.

Over seven in 10 (72%) usually prepare Thanksgiving dinner with the intention of having leftovers, which may be why 56 percent believe the holiday is actually a failure if there isn’t any food left at the end. Popular ways to revive holiday leftovers include microwaving (64%) and baking (47%).

Half look to their own recipes for inspiration on how to reuse their holiday fare, while 45 percent rely on their parents or grandparents’ recipes — much more than food-related social media accounts (24%). The reason? Sixty-three percent say they were no longer edible, while 37 percent admit they forgot to save them properly.

““Our survey shows that people love — and even prefer — the taste of Thanksgiving leftovers, but don’t always store them properly to reuse them later,” says Hilary McGuigan, senior brand director at Stasher, in a statement. “As a result, Thanksgiving meals can often result in quite a bit of food waste.”

Nevertheless, 64 percent say sustainability is important in their Thanksgiving celebration. One way people are manifesting this is through their holiday menu; respondents add that on average, a quarter of their Thanksgiving leftovers are vegetarian or vegan meals.

“Making more planet-friendly choices for the holiday is about more than just selecting sustainably-sourced food,” notes Shannon Morgan Stearns, vice president of marketing at Stasher. “There are a variety of products like Stasher bags that help families keep their leftovers longer, reducing not only food waste but also single-use plastic waste that enters landfills and oceans.”

Who wins Super Bowl LVII? Computers playing Madden NFL 23 have the answer — and the score!25 mins ago