HOUSTON — Everyone could use a helping hand from time to time, but it’s even more beneficial for people living with physical disabilities. Researchers at Rice University’s George R. Brown School of Engineering are now working on a device that could serve as a third “arm.” Even better, their study reveals that the invention runs on air and the power of walking.

The extra “limb” is able to grasp small objects and carry them along as the user moves. This particular prototype is not an actual robot arm, but a piece of fabric that hugs the user’s waste when not in use. It extends outward when active, using an elastomer lining to maintain a grip on objects, even if they’re slippery.

Robotic device designer Daniel Preston says future versions of the arm could have sensors that anticipate what the wearer wants to do or grip. Right now, the device derives its power from walking. The team at Rice has also created a shirt with a bellows-like actuator connected to the user’s armpit that expands, enabling the wearer to pick up something weighing as much as 10 pounds.

“Census statistics say there are about 25 million adults in the United States who find it difficult to lift 10 pounds with their arms,” says lead author Anoop Rajappan, a postdoc supported by the Rice Academy of Fellows, in a university release. “That’s something we commonly do in our daily lives, picking up household objects or even a baby.”

The third “arm” has two basic components. First, there are textile pumps embedded in the soles of the user’s shoes which harvest air pressure. Next, pneumatic actuators make use of the pressure when the wearer needs help. The pumps also contain open-cell polyurethane foam that help them retain their shape after each step the wearer takes.

“The stiffness of the foam is about on par with a typical shoe insert,” Preston says. “We wanted to make sure this felt like something you’d actually want to have inside of your shoe.”

Lab testing reveals that the device produces the equivalent of three watts of power, along with a conversion efficiency of more than 20 percent. This means the simple, air-powered device actually outperforms current electromagnetic, piezoelectric, and triboelectric devices which try to harvest energy from walking.

Moreover, researchers say all of the components of this device cost a grand total of $20! It’s also easy to assemble and simple to clean without fear of breaking down in the washing machine.

“The fabrication approach uses techniques that are already employed in the garment industry, things like cutting textile sheets and bonding them with heat and pressure,” Preston notes. “We’re ready to think about translating our work towards products.”

Can anyone wear this device?

Rajappan notes that the team is working on predicting how well assistive devices will work with people with different weights, heights, and walking speeds.

“One way to take this forward will be to use the model to optimize performance for specific user groups,” the study author says.

“We’re also thinking about devices like pneumatic actuators that apply therapeutic compression for things like deep vein thrombosis, blood clots in the legs,” Rajappan adds. “Anything that requires air pressure can be powered by our system.”

“Now that we’re providing the power, we can tap into all the existing work on actuation,” Preston concludes. “This would include things like gloves that help people close their hands, assistance at both the elbow and shoulder joints and other devices that still rely on typically rigid and bulky power supplies that are either uncomfortable or require being tethered to external infrastructure.”

The team’s work is published in the journal Science Advances. 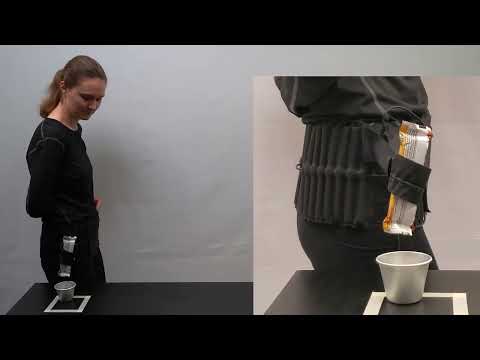 Best Tablets For Kids In 2023: Top 5 Devices Most Recommended By Experts17 mins ago

Want to feel happier? Your location may be affecting your emotions, according to millions of Tweets43 mins ago

Responsibility is hard: 6 in 10 people under 42 say they’re burned out — from being an adult1 hour ago Who is Elizabeth Taylor Greenfield? The story behind America’s first Black pop star6 hours ago