TALLAHASSEE, Fla. — Just how powerful were the jaws of arguably the most feared dinosaur, the Tyrannosaurus rex? A new study finds that the tyrant lizard could pulverize prey with up to 8,000 pounds of force — more than double the bite from today’s strongest creature: the saltwater crocodile.

Researchers from Florida State University and Oklahoma State University discovered that T-rex teeth could exert astounding tooth pressures of 431,000 pounds per square inch. Such power allowed the dinosaur to practice “extreme osteophagy,” or more simply put, the ability to devour bones with ease.

This practice of osteophagy is usually a behavior of carnivorous mammals such as wolves and hyenas. This wouldn’t be an obstacle for the T. rex with its combined biting power and saw-like teeth.

“It was this bone-crunching acumen that helped T. rex to more fully exploit the carcasses of large horned-dinosaurs and duck-billed hadrosaurids whose bones, rich in mineral salts and marrow, were unavailable to smaller, less equipped carnivorous dinosaurs,” says Paul Gignac, assistant professor of anatomy and vertebrate paleontology at OSU’s Center for Health Sciences, in a news release.

Gignac and co-researcher Gregory Erickson, a professor of biological science at FSU, started collecting their data for their research when they dangerously tied down crocodiles and measured their bite forces. Then, they compared the results to birds, considered our “modern-day” dinosaurs because of their similar skeletal structure and musculature. Using the data, they developed a model to figure out the potential jaw and tooth strength of the T.rex, which they believe is very close to reality.

“Having high bite force doesn’t necessarily mean an animal can puncture hide or pulverize bone, tooth pressure is the biomechanically more relevant parameter,” explains Erickson. “It is like assuming a 600 horsepower engine guarantees speed. In a Ferrari, sure, but not for a dump truck.”

To put it in another perspective, human bites measure at a matchless 200 pounds. 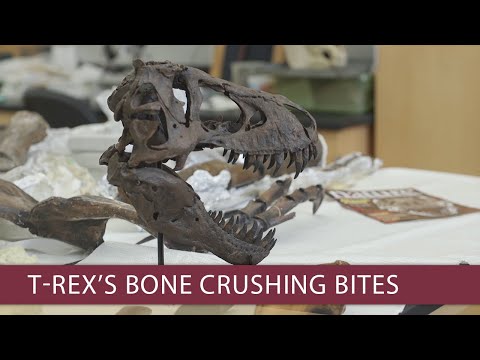 The force of the T-rex bite allowed the carnivore to “stand out for habitually biting deeply into bones, pulverizing and digesting them.” In an report with NPR, Erikson says the incomparable bite force was enough to “slice through just about anything in its realm.”

The study on the T-rex’s chompers is published in the journal Scientific Reports.