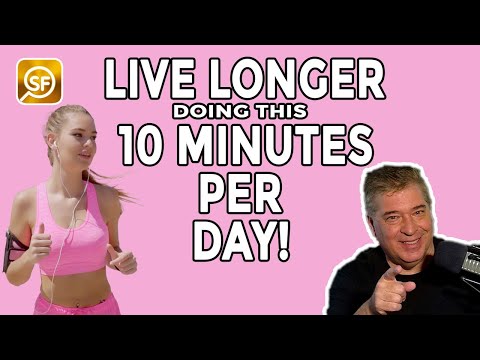 BETHESDA, Md. — Could a 10-minute power walk every day could add years to your life? A recent study of nearly 5,000 older adults found that deaths fell as physical activity increased. Just 10, 20, or 30 minutes extra exercise a day per day reduced annual mortality rates by seven, 13 and 17 percent respectively.

The research is based on Americans aged 40 to 85 who wore accelerometers on their waist for a week.

“The potential public health benefit of changing daily physical activity by a manageable amount is not yet known. In this study, we used accelerometer measurements to examine the association of physical activity and mortality in a population-based sample of U.S. adults,” the authors write in their paper.  “These findings support implementing evidence-based strategies to improve physical activity for adults and potentially reduce deaths.”

The study shows that adding 10 minutes of physical activity each day resulted in an estimated 111,174 preventable deaths per year. Not surprisingly, the more physical activity, the more deaths prevented. The number almost doubled and tripled to 209,459 and 367,037, respectively, for 20 and 30 minutes. Similar results were observed for men and women, including those of all ethnic backgrounds.

Volunteers were tracked for an average of ten years, during which time 1,165 deaths occurred. The researchers used a statistical technique called PAF (population attributable fraction (PAF). It estimated the proportion that could have been prevented annually with
modest increases in moderate-to-vigorous physical activity (MVPA).

For healthy adults, doctors recommend at least 150 minutes of activity or 75 minutes of moderate or vigorous aerobic activity, respectively, a week.

Exercise helps people lose weight, of course, lowering the risk of cardiovascular disease, diabetes and some cancers. It also protects against dementia by boosting blood flow to the brain.

“To our knowledge, this is the first study to estimate the number of preventable deaths through physical activity using accelerometer-based measurements among U.S. adults while recognizing that increasing activity may not be possible for everyone,” the authors note.

The paper is published in JAMA Internal Medicine.