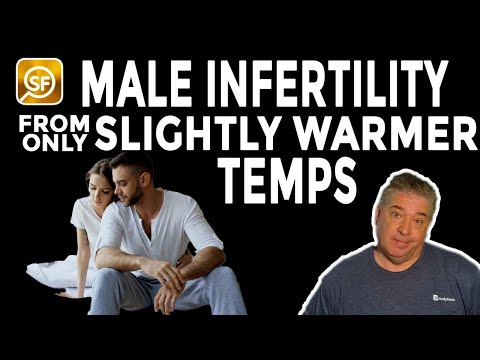 OKAZAKI, Japan — Colder is better when it comes to male fertility, a new study reveals. Researchers in Japan have found that even slight changes in the temperature of a man’s testicles can quickly result in a failure to produce healthy sperm.

The new study found that at 34° Celsius (93.2° Fahrenheit), spermatogenesis is able to successfully produce healthy sperm. However, at temperatures between 37 and 38°C (98.6 and 100.4°F), this process severely breaks down.

Heat is bad for humans and animals

Researchers note that several previous studies have examined the link between heat and spermatogenesis impairment among animals. Those experiments involved relocating the testes to an animal’s abdomen, where body temperature is between 98.6 and 100.4°F.

However, those experiments could not control the actual testicular temperature. The new study used a testis organ culture to support complete spermatogenesis inside an incubator. By culturing mouse testes at different temps, the team discovered that spermatogenesis fails in several stages as temperatures rise from 30°C (86°F) to 40°C (104°F).

“We did not expect such a delicate ensemble of multiple temperature-dependent events to underpin this well-known phenomenon. This discovery could only have been achieved using an organ culture system,” says study leader Shosei Yoshida from the National Institute for Basic Biology in a media release.

In terms of meiosis dysfunction, the ability to repair DNA double-strand breaks and homologous chromosome pairing breaks down between 37 and 38°C. These two abilities are necessary for proper chromosome segregation.

“It was surprising that essential processes, such as meiosis, can be easily damaged at normal body core temperatures. Through the combined functions of the scrotum and checkpoint, only sperm developed at low temperatures fertilizes eggs to generate the next generation. Key questions for future studies include the molecular mechanism of heat sensitivity and the biological significance of low temperatures in sperm production,” concludes Kodai Hirano, the primary contributor to this study.

The findings appear in the journal Communications Biology.

How to plan the best birthday party for your kids: For one, don’t stress over it9 mins ago

How to plan the best birthday party for your kids: For one, don’t stress over it