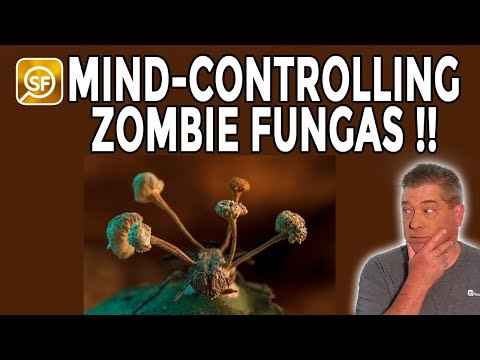 ‘Roberto García-Roa’s striking image is like something out of science fiction.’

LONDON — The discovery of a mind-controlling “zombie” fungus may not be something to celebrate — but a picture of it killing its insect victim is receiving cheers from the scientific community! The stunning photo has won the second BMC Ecology and Evolution Image Competition, edging out a number of eye-catching scenes from nature this year.

The University of Valencia’s Roberto García-Roa captured the incredible image of a parasitic fungus erupting from the body of a fly. Researchers say this particular fungus infecting the fly (genera Ophiocordyceps) actually takes over the victim’s body and mind. It forces them to move to locations which are better for fungus growth before leaving the insect’s body to find and infect more victims.

“The image depicts a conquest that has been shaped by thousands of years of evolution. The spores of the so-called ‘zombie’ fungus have infiltrated the exoskeleton and mind of the fly and compelled it to migrate to a location that is more favorable for the fungus’s growth. The fruiting bodies have then erupted from the fly’s body and will be jettisoned in order to infect more victims,” says García-Roa in a media release.

“Roberto García-Roa’s striking image is like something out of science fiction. It illustrates both life and death simultaneously as the death of the fly gives life to the fungus,” adds senior editorial board member Christy Anna Hipsley, who recommended the entry.

“Here, they await death, at which point the fungus feeds on its host to produce fruiting bodies full of spores that will be jettisoned to infect more victims—a conquest shaped by thousands of years of evolution.”

In addition to the overall winner, judges selected winners and runners-up in four other categories: Relationships in Nature, Biodiversity Under Threat, Life Close Up, and Research in Action. Journal authors say the winning photographs highlight the relationships between species, the minutiae of life on Earth, and the challenges facing it.

In the “Relationships in Nature” category, this year’s winner featured “a plant-frugivore relationship,” submitted by Alwin Hardenbol. The photograph depicts a Bohemian Waxwing eating fermented rowan berries, demonstrating the strong relationship between plants and fruit-eating animals.

The runner-up in the category depicts predator–prey relationship at the Smithsonian Tropical Research Institute in Panama.

“This image illustrates how natural and sexual selection can be at odds. A male Túngara frog (Physalalamus pustulosus) makes a tasty meal for a hungry fringe-lipped bat (Trachops cirrhosis) that detected and localized the frog by listening to the mating call,” says behavioral biologist Alexander T. Baugh.

In the “Biodiversity Under Threat” category, Samantha Kreling from the University of Washington captured a winning image of African elephants taking shelter from the Sun under a large baobab tree in South Africa during a drought.

“Baobab trees can live for more than 2,000 years and store water in their barrel-like trunks when water is scarce. The tree in this image has had its bark stripped by elephants seeking water. Although these trees are usually fast-healing, this damage is more than baobab trees can cope with as temperatures rise due to climate change. This photograph highlights the need for action to prevent the permanent loss of these iconic trees,” Kreling says.

“I think it is important to realize that effects of major drivers of biodiversity change can also happen in counter-intuitive ways. In the present case, due to climate warming, there is an increased risk of the frog offspring dying because of cold/freezing (due to severe changes in phenology),” notes senior editorial board member Josef Settele.

“The eggs in this image are among those laid by thousands of gliding treefrogs during an explosive breeding event triggered by a torrential rainstorm. If undisturbed, these eggs will hatch after six days of development, however the embryos can hatch early in order to escape threats such as predators and flooding,” says Brandon André Güell from Boston University, who took the picture.

Meanwhile, the runner-up image in this category captured an anole lizard using a clever trick to breathe under water.

“Water Anoles (Anolis aquaticus) are small Neotropical lizards that escape to the water when threatened by predators. They can spend almost 20 min underwater, inhaling and exhaling a bubble of air that clings to their snout. Oxygen from this bubble is depleted over the underwater dive, which likely helps water anoles remain underwater for so long,” explains Lindsey Swierk, who took this image as well.

Lastly, the “Research in Action” winner, taken by Jeferson Ribeiro Amaral from Cornell University, featured two researchers from the State University of Rio de Janeiro, Brazil. The pair were working during the COVID-19 pandemic, investigating whether isolated trees help to lessen the impact of human activity on frog populations.

“The researchers in this image are representative of so many others who carried on working throughout the COVID-19 pandemic. This image demonstrates their strength and dedication to understanding our world as they carry out their work despite thunderstorms and a global pandemic,” Ribeiro Amaral says.

The runner-up in this category featured Brandon A. Güell standing alongside thousands of gliding treefrogs and their recently laid eggs.

All of the winners appear in the journal BMC Ecology and Evolution.