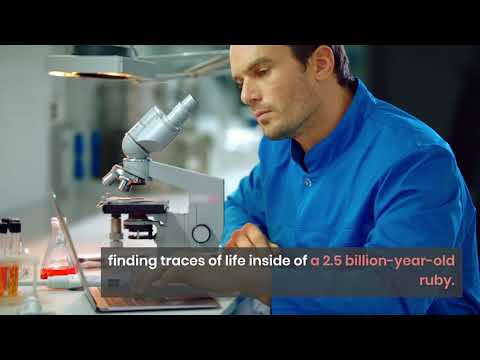 WATERLOO, Ontario — Ancient life often turns up inside amber or as fossils unearthed after millions of years in the ground. Now, researchers in Canada have made an even more remarkable discovery — finding traces of life inside of a 2.5 billion-year-old ruby.

A team from the University of Waterloo says they found carbon residue inside one of the world’s oldest precious gemstones. Carbon is one of the key building blocks of life on Earth. While examining the geology of ancient rubies in Greenland, researchers found a ruby containing graphite — a mineral consisting of pure carbon. Further studies of the sample points to it being a remnant of microscopic life from Earth’s early days.

“The graphite inside this ruby is really unique. It’s the first time we’ve seen evidence of ancient life in ruby-bearing rocks,” says Chris Yakymchuk, a professor of Earth and Environmental Sciences, in a university release. “The presence of graphite also gives us more clues to determine how rubies formed at this location, something that is impossible to do directly based on a ruby’s color and chemical composition.”

Which came first, the carbon or the ruby?

“Living matter preferentially consists of the lighter carbon atoms because they take less energy to incorporate into cells,” Yakymchuk explains. “Based on the increased amount of carbon-12 in this graphite, we concluded that the carbon atoms were once ancient life, most likely dead microorganisms such as cyanobacteria.”

These traces of life come from a time when the planet had little oxygen in the atmosphere. At that point, life could only exist in the form of microorganisms and algae films.

Unlike animals which end up trapped inside tree resin to become beautiful amber fossils, researchers believe these organisms actually came first and played a key role in the creation of the rubies they were found in. The team believes the graphite changed the chemistry of the surrounding rocks, creating conditions that allowed a ruby to grow.

Yakymchuk adds that without this ancient life being present, there would be no ruby deposits in that area of Greenland.

The findings appear in the journal Chemical Geology.