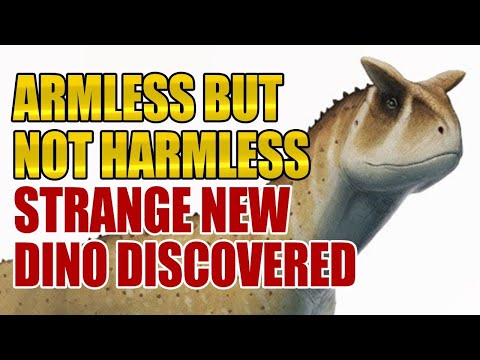 LONDON — A new dinosaur species discovered in Argentina is giving new meaning to the phrase, “look Mom, no hands!” Researchers have found a new relative in a family of dinosaurs which scientists believe had no arms.

The new species, Guemesia ochoai, appears to be an abelisaurid. Researchers say these dinosaurs were fierce carnivores that roamed present-day Africa, South America, and India around 70 million years ago. Just like the more famous Tyrannosaurus rex, this armless predator had to rely on its powerful head and jaw to catch prey. However, study authors say the front limbs of abelisaurs were even shorter than the tiny arms of a T-Rex.

Unlike many other abelisaur fossils, which have been found in the southern portion of Argentina, researchers found the skull of this new creature in the country’s north-west region.

“This new dinosaur is quite unusual for its kind. It has several key characteristics that suggest that is a new species, providing important new information about an area of the world which we don’t know a lot about,” says Professor Anjali Goswami, research leader at the Natural History Museum in London, in a media release.

“It shows that the dinosaurs that live in this region were quite different from those in other parts of Argentina, supporting the idea of distinct provinces in the Cretaceous of South America. It also shows us that there is lot more to be discovered in these areas that get less attention than some of the more famous fossil sites.”

Breaking up and heading south

As dinosaurs were roaming around the Earth hundreds of millions of years ago, they did so on a giant supercontinent we now call Pangaea. Over time, the planet’s tectonic plates shifted, breaking up Pangaea and slowly creating the continents humans know today.

Part of that initial breakup included the creation of two landmasses, Gondwana and Laurasia. Around 180 million years ago, researchers believe these two continents started to split even further. Gondwana would break up into the continents that now sit in Earth’s southern hemisphere, as well as India.

These changes didn’t happen overnight, and study authors believe many prehistoric species would have been able to move between the new continents before they drifted too far apart. This also points to a reason why prehistoric life on different continents still looks very similar.

With that shift in mind, study authors say abelisaurid dinosaurs were one of the species living in Gondwana during this time. Studies of abelisaurs also point to it being one of the top predators in this region, feeding on other large dinosaurs like titanosaurs. Previous excavations have found abelisaur fossils in rocks across Africa, South America, India, and even Europe. All of them date back to the Late Cretaceous period — the time just before the mass extinction of the dinosaurs 66 million years ago.

Air conditioning built into the brain?

Scientists discovered the fossil’s braincase in the Los Blanquitos Formation near Amblayo in northern Argentina. The new dinosaur’s skull has some interesting features which are puzzling the scientists trying to figure out where Guemesia ochoai fits into the abelisaur family tree.

Interestingly, the team found rows of small holes in the front of the dinosaur’s skull, called foramina. Researchers suspect that the holes allowed the animal to cool down, with blood pumping into the thin skin in the front of Guemesia ochoai’s head. This may have helped the creature to release excess heat.

Although many abelisaurids have “remarkably small” braincases, the new fossil is even smaller than that. Study authors say the new fossil’s braincase is about 70 percent smaller than its prehistoric relatives. The smaller braincase may mean this animal was a juvenile and not a full-size dinosaur, but the evidence proving this is still unclear.

The new abelisaurid also lacks horns, which other members of this armless dinosaur family tend to have. The team says this could mean Guemesia ochoai is near the bottom of the family tree.

“Understanding huge global events like a mass extinction requires global datasets, but there are lots of parts of the world that have not been studied in detail, and tonnes of fossils remaining to be discovered,” Prof. Goswami concludes.

The description of the dinosaur appears in the Journal of Vertebrate Paleontology.