BOSTON, Mass. — A new “smart” packaging could make food poisoning a thing of the past, according to an international team of scientists. Researchers in the United States and Singapore say it kills harmful bugs such as E.coli, Salmonella, and listeria — keeping meat, fish, fruit, and vegetables fresh for longer.

The water-proof wrapping may also help save the planet by reducing food waste. It looks just like plastic, but the team notes that it’s biodegradable and sustainable.

“This invention would serve as a better option for packaging in the food industry, as it has demonstrated superior antimicrobial qualities in combatting a myriad of food-related bacteria and fungi that could be harmful to humans,” says project co-leader Professor Mary Chan of Nanyang Technological University in a release.

“The packaging can be applied to various produces such as fish, meat, vegetables, and fruits. The smart release of antimicrobials only when bacteria or high humidity is present, provides protection only when needed thus minimizing the use of chemicals and preserving the natural composition of foods packaged.”

Scientists made the transparent material from starch, a type of corn protein called zein, and other naturally derived biopolymers. It also contains a cocktail of anti-microbial compounds found in plants. They include oil from thyme, a common herb used in cooking, and citric acid found in oranges and grapefruits.

In experiments, the packaging released small amounts of these substances when exposed to humidity or enzymes from bacteria and fungi that contaminate food. This ensures the packaging can endure several exposures and last for months.

The chemicals destroy any bacteria that grows on the surface of food or the wrapping itself. Strawberries stayed fresh for seven days before developing mold, three days more than counterparts in mainstream plastic boxes.

“One of the most efficient ways to enhance food safety and reduce spoilage and waste is to develop efficient biodegradable nontoxic food packaging materials. In this study, we used nature-derived compounds including biopolymers, non-toxic solvents, and nature-inspired antimicrobials and develop scalable systems to synthesize smart antimicrobial materials which can be used not only to enhance food safety and quality but also to eliminate the harm to the environment and health and reduce the use of non-biodegradable plastics at global level and promote sustainable agri-food systems.”

An eco-friendly replacement for the packaging industry

The packaging industry is the largest consumer of synthetic plastics coming from fossil fuels. These products also account for the bulk of plastic waste that is polluting the environment.

“The NTU-Harvard Chan School food packaging material would serve as a sustainable solution for companies like us who want to cut down on the usage of plastic and embrace greener alternatives,” Peter Barber, CEO of ComCrop, a Singapore company that pioneered urban rooftop farming. 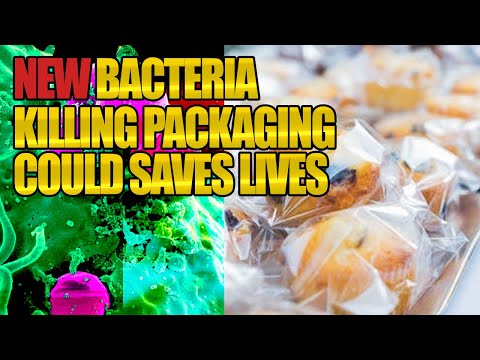 Prof. Chan says their invention has enormous implications, serving as an environmentally friendly alternative. The aim is to replace conventional plastic packaging with the new material that will also double the shelf life of produce.

“The sustainable and biodegradable active food packaging, which has inbuilt technology to keep bacteria and fungus at bay, is of great importance to the food industry. It could serve as an environmentally friendly alternative to petroleum-based polymers used in commercial food packaging, such as plastic, which have a significant negative environmental impact,” Prof. Chan concludes.

The new packaging is described in the journal ACS Applied Materials & Interfaces.

Best Tablets For Kids In 2023: Top 5 Devices Most Recommended By Experts40 mins ago