PORTSMOUTH, United Kingdom — A winged dinosaur with razor sharp claws and teeth may be the ancient ancestor of the famous Velociraptor, researchers in the United Kingdom say.

A team found its remains on the Isle of Wight and note that the new fossil appears to come from a creature that was a bigger and more powerful version of the meat-eating raptor of “Jurassic Park” fame. Study authors estimate that the terrifying bird-like beast was 10 feet long from nose to tail, with a body the size of a wolf, and relied on brute strength to overpower prey.

Scientists believe the dinosaur may have even climbed trees, pouncing on prey like a leopard. The creature then dispatched them with huge slashing talons, ripping off chunks of the kill with finely serrated teeth.

Another discovery on ‘Dinosaur Island’

Vectiraptor greeni is the fourth new species discovered at the holiday destination in just a few months. Scientists have dubbed it “Dinosaur Island,” with more dinosaur bones being unearthed on the Isle of Wight than anywhere else in Europe.

“This was a large, and very heavily constructed animal,” says lead author Dr. Nick Longrich from the University of Bath in a release. “The bones are thick-walled and massive. It clearly didn’t hunt small prey, but animals as large or larger than itself.”

The latest find points to a greater diversity of dinosaurs roaming through present-day Europe than scientists previously believed. 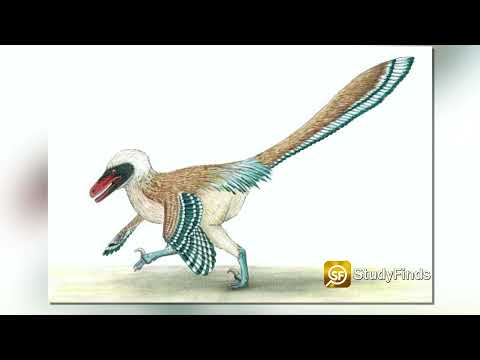 Vectiraptor lived 125 million years ago, according to the research team. The new dinosaur was named after local collector Mick Green. He discovered its bones washed up at Compton Bay on the island’s south coast. Study authors believe the dinosaur would have prowled through forests that covered the land in prehistoric times.

The team notes that storms and waves eroded away the rocks that entombed its remains, leading to the dinosaur’s discovery in 2004. However, it took nearly 20 years for scientists to make the surprising find that the bones represent an entirely new species.

The discovery, described in the journal Cretaceous Research, marks the first time a large raptor has ever been found in England. Vectiraptor belonged to a group of dinosaurs called dromaeosaurs — or raptors.

Researchers call these particular raptors specialist hunters and, like their modern-day bird relatives, were covered in long feathers. Their jaws were full of blade-like, jagged teeth that tore through flesh. Huge scythe-shaped claws on their feet first sliced prey open, causing animals to rapidly bleed to death.

The study shows Vectiraptor was almost twice as big as its Velociraptor descendants. Researchers say these predators would have eaten other dinosaurs and the young of larger rivals. Top predators of the Early Cretaceous Period likely included the allosaur Neovenator, spinosaurs like Baryonyx, and an early tyrannosaur called Eotyrannus.

“This dinosaur is incredibly exciting, adding to the huge diversity of dinosaurs here on the Isle of Wight, and helping to build a bigger picture of the Early Cretaceous world,” says co-author Megan Jacobs of Portsmouth University. “This little dinosaur also serves as an excellent example of the importance of amateur fossil collectors, and how working with them can produce important scientific research, which would otherwise not be possible.”

“There’s an extraordinary diversity of dinosaurs known in England in the Cretaceous, and even after more than a century of study, we continue to find new species,” Dr. Longrich adds. “Although paleontologists have been studying these dinosaurs for a long time, it’s hard going. We have to wait for the sea cliffs to fall and expose bits of bone, or for the waves to wash them out of the rocks. We’ve spent two centuries on the Isle of Wight piecing together our picture of English dinosaurs.”

Vectiraptor is set to join other recent finds on display at the Dinosaur Isle Museum at Sandown — Britain’s first attraction specifically for dinosaurs.