COVENTRY, England — Speech is one of the most uniquely human characteristics. Its origins, however, remain one of the great mysteries of human development. New research now shows that chimpanzees exhibit a characteristic that might reveal some of the first steps in the evolution of human speech.

Several years ago, researchers noticed that monkeys signaled each other by smacking their lips and using strange open-close mouth patterns. What they found most interesting about this behavior is that the rate at which the monkeys made these mouth movements was very similar to the rate humans move their mouths when speaking: about 5 Hertz, or 5 open-close cycles per second.

At the time researchers thought this mouth-moving behavior might be related to human speech. They only observed this behavior, however, in primate species like orangutans and gibbons, which aren’t as closely related to humans as other African ape species.

Looking at lip-smacking among chimpanzees

In this new study, the research team, led by scientists at the University of Warwick, looked for these mouth signaling patterns in chimpanzees specifically. Of course, chimps are humans’ closest relatives in the animal kingdom. They looked at four different chimpanzee populations: captive chimpanzees in Edinburgh Zoo and Leipzig Zoo, and wild chimpanzees from the Kanyawara and the Waibira sanctuaries in Uganda.

Using video recordings taken of the chimps while they groomed each other, researchers say the monkeys made lip-smacks at an average rate of 4.15 Hertz — very close to the 5 Hertz rate of human speech. This indicates that evolution relied on primate lip-smacking behavior when forming the vocal system of human speech that’s still around today.

“Our results prove that spoken language was pulled together within our ancestral lineage using ‘ingredients’ that were already available and in use by other primates and hominids,” says senior author Dr Adriano Lameira, a professor in the Department of Psychology at the University of Warwick, in a press release. “This dispels much of the scientific enigma that language evolution has represented so far.” 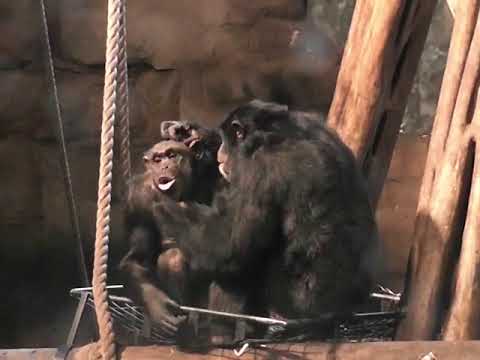 He adds that the different chimpanzee populations studied exhibit different lip-smacking behavior. It’s almost as if each community has its own mouth-moving language. “We found pronounced differences in rhythm between chimpanzee populations, suggesting that these are not the automatic and stereotypical signals so often attributed to our ape cousins,” he says. “Instead, just like in humans, we should start seriously considering that individual differences, social conventions and environmental factors may play a role in how chimpanzees engage ‘in conversation’ with one another.”

Lameira points out the need to protect chimpanzee populations so they can continue to be studied. “If we continue searching, new clues will certainly unveil themselves,” he concludes. “Now it’s a matter of mastering the political and societal power to preserve these precious populations in the wild and continue enabling scientists to look further.”

The study is published in Biology Letters.