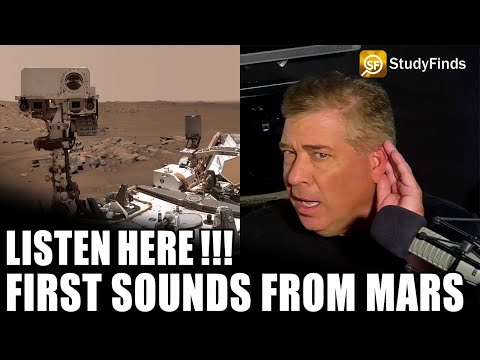 PARIS, France — The newest manmade visitor on Mars has just provided humans with the first clues about what the red planet sounds like. NASA’s Perseverance robot has successfully recorded what scientists are calling the “sound environment” on Mars.

For 50 years, space probes and rovers have taken thousands of pictures of Mars but have heard the same thing they would in the vacuum of space — silence. Now, Earth’s newest rover has put an end to that, thanks to a team from the United States and France who constructed an instrument called the SuperCam2. Perseverance landed on Mars in February 2021.

Using a specially-designed microphone, the rover recorded the Martian winds for the first time. The team notes that the sounds are within the audible spectrum of humans if mankind ever travels to the red planet — sitting between 20 Hz and 20 kHz.

However, humans shouldn’t expect a noisy greeting when they arrive. Scientists found an extremely quiet setting with few if any natural sound sources aside from the wind. It’s so quiet on Mars that previous studies have actually thought their microphone equipment wasn’t working.

LISTEN TO THE SOUNDS OF MARS HERE

A different speed of sound on Mars?

Interestingly, the first sounds from Mars may not be the most noteworthy thing to come from Perseverance. It turns out Mars has a different speed of sound than Earth does. While the sound barrier on our planet is about 761 miles per hour, it’s only 537 miles per hour there.

Moreover, the red planet actually has two sound barriers! One speed of sound is for the treble and one measures the bass. Specifically, bass refers to anything up to 150Hz, or 150 oscillations per second. These are the “low” sounds that your body can feel when they’re very loud. Treble, on the other hand, corresponds to sounds from 6KHz (6,000 oscillations per second) up to the limit of human hearing.

The speed at which sound dissipates on Mars is much higher than it is here, especially the treble — which scientists say dies out quickly even over short distances. Therefore, if two people try to have a conversation on Mars, it would be hard to hear the other person if they were just 15 feet away.

Part of the reason for this is the composition of the Martian atmosphere, which is 96 percent carbon dioxide (CO2). It’s just 0.04 percent on Earth. The pressure is also much lower on Mars, 170 times lower than here on Earth.

The findings are published in the journal Nature.

Best Digital Picture Frames In 2023: Top 5 Displays Most Recommended By Experts58 mins ago