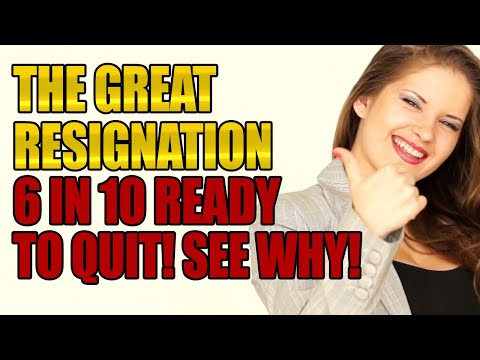 NEW YORK — Thinking about quitting your job? You’re not alone – not even close! Over half of Americans have a resignation letter drafted and saved for when they hit their breaking point at work.

A survey of 2,000 employed Americans found 59 percent have contemplated quitting their jobs enough to have that letter ready to go but haven’t followed through with sending it – yet.

The ‘Great Resignation’ is real One in three respondents (34%) reported quitting their jobs within the past two years, joining a growing list of Americans who’ve participated in “The Great Resignation” – a period seeing a record number of workers leaving their jobs. Nearly half of those resigning are members of Gen-Z (47%) — a stark contrast to the 13 percent of baby boomers who have left their jobs.

The poll reveals that the industries seeing the most employees quit during the pandemic are the healthcare (48%), real estate (46%), and hospitality (39%) fields. Over half (55%) of those who recently quit a job think it was the “best decision” they made in a long time, with 45 percent leaving for professional reasons and 29 percent quitting for personal reasons.

Commissioned by Wisetail and conducted by OnePoll, the study also revealed six in 10 millennials and Gen Xers (59%) especially believe leaving their jobs was the best decision they’ve made. The most common reasons for quitting included finding a different job that offers better pay (57%), better work/life balance (55%), and better working conditions (54%).

Nearly nine in 10 (88%) workers who quit their job say they would have stayed if their employer offered better benefits, such as having more opportunities for growth (52%), better working conditions (52%), or having internal career development (49%). However, close to two-thirds (63%) would rather work in a new job than try to get a better position with their current employers. This was especially true for younger Americans — including 69 percent of millennials and 64 percent of Gen Z.

COVID’s role in the Great Resignation Most Americans blame COVID-19 for quitting their jobs — since 66 percent believe the pandemic has directly affected what they do for work today. Nearly as many people (65%) have switched to different careers since the pandemic began in March 2020.

Those respondents who recently quit their jobs add they notified their employers five weeks in advance of their resignation date. With so many Americans quitting in “The Great Resignation,” two in three believe that trend will affect how they seek work post-pandemic.

“We’re seeing a massive shift in priorities,” says Ali Knapp, president at Wisetail, in a statement. “Potential employees are being more vocal about what they want out of a job — whether that means having more mental health days, better pay, or intangible benefits.”

For the respondents who are still at their jobs, 63 percent believe they would make better bosses than their current boss. Half of the part-time respondents (49%) and 41 percent of people over 56 feel strongly about this point; believing they’re better leaders than their actual bosses.

Almost as many (61%) wish they had more responsibilities at work than they currently do, and 57 percent feel the need to go job hunting because their bosses aren’t offering what they need.

Six in 10 would even take an average 14-percent pay cut if it meant working in a better environment. Whether they’re searching for work or not, three in four people believe their ideal job would be with a company that aligns with their personal values.

“Ultimately, people want to be heard. When people feel like their needs aren’t being addressed or met, they’re more likely to look elsewhere, where their needs can be met. Once they find a company where their values align, people will find themselves feeling happy with what they do,” Knapp adds.