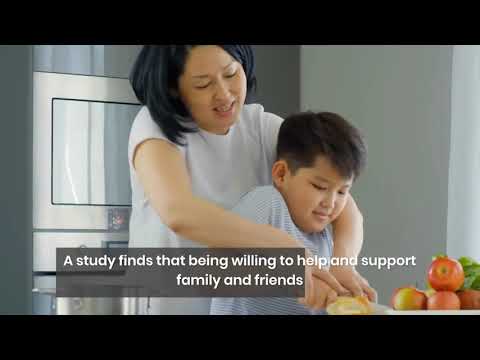 COLUMBUS, Ohio — Receiving gifts is obviously fun, but researchers from The Ohio State University are putting an entirely new spin on the old saying that it’s better to give than receive. Their study finds that being willing to help and support family and friends has a link to lower levels of chronic inflammation.

While scientists have long theorized that receiving support from loved ones during tough times is important to one’s health, this study is the first to determine that giving social support may be just as, or more, beneficial from a health perspective. The research concludes positive social relationships only display a connection to less inflammation among individuals willing and available to support their family and friends. This suggests, according to the research team, that having a few close friends or family members to lean on may not be all that beneficial unless you’re also there for them.

“Positive relationships may be associated with lower inflammation only for those who believe they can give more support in those relationships,” says lead study author Tao Jiang, a doctoral student in psychology at Ohio State, in a university release.

The key takeaway here is that a positive relationship with a friend, family member, or spouse is a two-way street. The support needs to be mutual.

“It may be that when people believe they can give more support to friends and family, these relationships are especially rewarding and stress-relieving, which reduces inflammation,” comments study co-author and OSU associate professor Baldwin Way.

The team analyzed data encompassing 1,054 adults between the ages of 34 and 84 for this project. Each person had filled out a survey measuring their “social integration.” The questionnaires asked if they lived with a romantic partner, how often they kept in touch with family and friends, and how often they attended social events or activities.

Additionally, each subject completed another survey that asked if they believed they could truly rely on their family, friends, or spouse if they needed help. Study authors also asked the group how willing to help they would be if a loved one needed support.

Then, two years later, all participants returned for a blood test measuring interleukin-6 (IL-6), a marker of bodily systemic inflammation.

“Higher levels of IL-6 are associated with increased risk for many of the diseases that are the top killers of Americans, including cardiovascular disease and cancer,” Dr. Way adds. “That’s why we thought it was important to find out why previous studies found such weak evidence for the link between social support and lower inflammation.”

Do women benefit more from helping others?

Importantly, the association between willingness to help others and lower inflammation held up even after study authors considered various other factors known to influence chronic bodily inflammation (such as age and income).

The study also finds that this connection may be especially important for, and more common among, women.

“This reflects the idea that social relationships are often seen as more important for women than for men,” Jiang says. “But our sample size was not large enough to show that conclusively. We need to study that issue further.”

The study appears in the journal Brain Behavior and Immunity.

Best Places To Live In America In 2023: Top 5 Cities Most Recommended By Experts12 mins ago

What’s the safest seat on a plane? Unfortunately it’s the least popular one46 mins ago