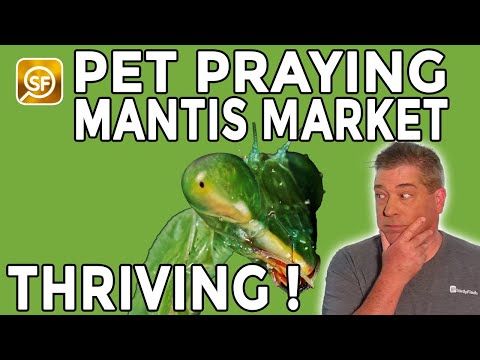 MONTECCHIO MAGGIORE, Italy — When most people think about getting a new pet, animals like dogs, cats, goldfish, and bunnies come to mind. According to a new research project, however, thousands of people all over the world have already decided to go with a more unusual companion: Praying mantises or stick insects.

According to researchers in Italy, the pet mantis market is thriving. Study authors explain these insects are being bought and sold at fairs and pet markets, and then “raised” by either professionals or amateur owners. The team adds that this largely unknown pet market appears to be growing in popularity.

These interesting insects come in a variety of shapes and sizes. Some are downright elegant and beautifully colorful, like the Orchid Mantis. Others look more like a Pokémon (the Jeweled Flower Mantis) than anything you may see on nature programs. Many, such as the Giant Shield Mantis, are totally safe to handle and pretty darn cute. We find the insect so stunning we’ve included a spectacular show of photographs at the end of the article.

According to this research, when prospective buyers are shopping for a praying mantis, they usually prioritize factors such as shape, size, colors, and behaviors. Species rarity and ease of care play a big determining role as well.

Study authors stress that this market is still very much unregulated. Therefore, it’s very important to get a better understanding of where it’s heading. Doing so may help facilitate the conservation of rare insect species and help avoid any ecosystem damage.

Who buys an insect as a pet?

A collection of nearly 200 hobbyists, enthusiasts, and professional sellers in the mantis community from 28 different countries took part in this research via a survey. Researchers say their responses largely show the mantis pet market is actually quite predictable.

The surveys indicate that a “typical mantis breeder or enthusiast” is between 19 and 30 years-old, and purchases mantises mostly due to either personal curiosity or scientific interest. Buyers are usually willing to spend over $30 per mantis, and most people prefer aesthetically pleasing species over rarer ones.

The study concludes buyers are “mostly curious enthusiasts with poor knowledge of the market dynamics and the laws behind it, even if they seem to generally care about their pet.” It’s worth noting that the findings also suggest these transactions aren’t always legal.

“About one time out of four the lack of permits or transparency from the seller is perceived from the buyer,” researchers say in a media release.

The research team adds that praying mantises, as well as insects in general for that matter, are still very much a mystery when it comes to biology, distribution, and threats across all species. Scientists haven’t even formally discovered every insect species out there yet. This, of course, limits conservation efforts. How can we protect what we don’t know about yet?

“Hobbyists and pet insect enthusiasts are producing and sharing a huge quantity of observations on the biology and ecology of hundreds of species, even rare or still undescribed ones, a priceless heritage for the scientific community,” researchers conclude. “Strengthening the dialogue between them, promoting a white market over a black one, may be a crucial help for the conservation of these insects, fundamental parts of the biodiversity of our planet, that are replacing our traditional pets at home.”

The findings appear in the Journal of Orthoptera Research.

Continue below for some additional incredible photos of the fascinating praying mantis.