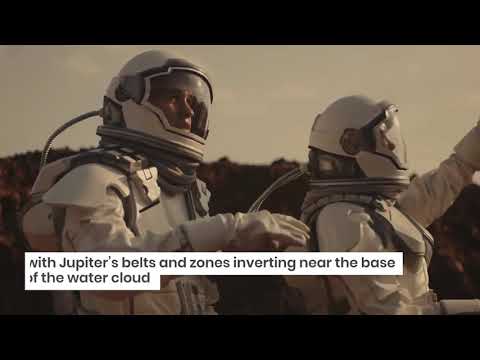 LEICESTER, United Kingdom — Launched over 10 years ago, NASA’s Juno space probe continually orbits the planet Jupiter collecting data. Now, an analysis of information captured by Juno’s microwave radiometer is revealing new, groundbreaking insights on the fifth planet from the Sun. Scientists from the University of Leicester explain that for the first time ever humanity is getting a peek into what goes on deep beneath Jupiter’s trademark colorful gas bands.

This banded pattern appears to extend much further than just the clouds visible from space, with Jupiter’s belts and zones inverting near the base of the water clouds. These observations, made possible by microwave light, have allowed scientists to form a much clearer understanding of Jupiter’s weather and climate within its warmer, darker layers.

Jupiter is the largest planet in our solar system, but its other claim to fame is for being a gas giant with colorful cloud bands sweeping across its surface. When scientists expose these cloud tops to microwave light, researchers call the planet’s bright, white bands “belts,” and the darker bands “zones.”

This is what Jupiter looks like at “shallower” altitudes, which are still roughly five times the average atmospheric pressure on Earth (five bars of pressure). However, at around 10 bars of pressure, this light show changes. Microwave light shows that the belts become dark and the zones become bright white. These observed meteorological and circulatory reversals may hold major implications.

“One of Juno’s primary goals was to peer beneath the cloudy veil of Jupiter’s atmosphere, and to probe the deeper, hidden layers,” says lead study author Dr. Leigh Fletcher, an associate professor in planetary science at Leicester and a participating scientist with the Juno mission, in a university release.

“Our study has shown that those colorful bands are just the ‘tip of the iceberg’, and that the mid-latitude bands not only extend deep, but seem to change their nature the further down you go. We’ve been calling the transition zone the jovicline, and its discovery has only been made possible by Juno’s microwave instrument.”

Diving deep into the planet’s mysteries

Jupiter’s planetary winds circulate in opposite directions, east and west, on the edges of its colorful bands. Scientists have long pondered if this circulatory setup only occurs on Jupiter’s cloud tops, or if the belts and zones persist at deeper depths.

In fact, answering this question has been one of Juno’s core missions, which is why the spacecraft carries a specially-designed microwave radiometer capable of measuring emissions deep within Jupiter.

Juno’s microwave radiometer operates on six wavelength channels (from 1.4 cm to 50 cm), allowing the satellite to probe the environment at pressures beginning with the top of the atmosphere around 0.6 bars to pressures over 100 bars, or 155 miles deep.

So what’s going on inside Jupiter?

The white, bright light emitted from Jupiter’s belts at the cloud tops suggests either warmer atmospheric temperatures, or a dearth of ammonia gas, which is a strong microwave light absorber. However, this changes the deeper you go into the atmosphere. Researchers theorize this reversal is due to either temperature or ammonia fluctuations.

Both theories hold separate yet noteworthy implications. If the changes are mainly due to ammonia gas distributions, that would indicate a “stacked system of opposing circulation cells,” which is actually quite similar to patterns seen on Earth in regards to tropics and mid-latitudes. At shallow depths, such circulation patterns would provide sinking in belts but at deeper levels it would create upwelling in belts. In other words, big storms and lots of precipitation, moving ammonia gas all over the planet.

On the other hand, if temperature is the main driver of these changes, that would mean the higher the temperature the greater the microwave emissions. Considering that temperatures and wind have a connection to each other, if this scenario is true Jupiter’s winds may in fact increase with depth below the clouds up until the jovicline — before eventually tapering off into the deeper atmosphere. This very relationship was actually suggested by an earlier NASA Jupiter probe, Galileo, in 1995.

In conclusion, study authors state the likeliest explanation is that both temperature and ammonia gas are at play simultaneously. Moving forward, the next step is grasping why exactly Jupiter’s circulation behaves in this manner.

The study is published in the Journal of Geophysical Research Planets.