HOUSTON, Texas — The Sun once looked a lot more like Saturn — and it may be the reason our planet isn’t bigger than it is, a new study reveals.

Researchers from Rice University say that our home star once had giant rings of stellar dust that eventually fueled the creation of life on our planet. They claim that without these rings around the Sun, life on Earth may have never developed.

Their study finds these rings actually prevented Earth from getting too big and developing a massive gravitational pull which would have stunted the growth of organisms. Such a gravitational attraction would have also made devastating asteroid impacts more frequent.

“In the solar system, something happened to prevent the Earth from growing to become a much larger type of terrestrial planet called a super-Earth,” says lead author Dr. Andre Izidoro in a university release. 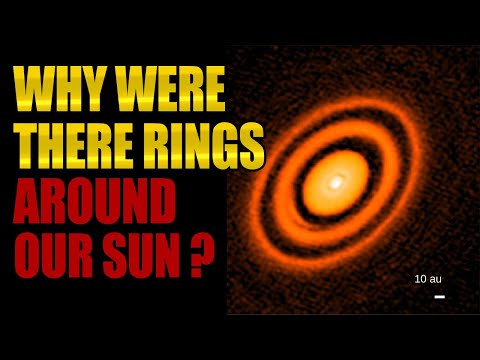 These giant planets are rocky masses between about two and ten times the size of Earth. Super-Earths inhabit about 30 percent of sun-like star systems in the Milky Way. The findings in Nature Astronomy come from hundreds of supercomputer simulations examining the solar system’s formation.

Those simulations produced rings like those seen around many distant, young stars. It also accurately identified the asteroid belt between Mars and Jupiter. The computers correctly predicted the development of the locations and stable, almost circular orbits of Earth, Mars, Venus, and Mercury. They also correctly calculated the masses of the inner planets — including Mars — which previous studies have overestimated.

Additionally, the study accounted for the formation of the Kuiper belt of comets, asteroids, and small bodies beyond the orbit of Neptune. The computer model assumes that three bands of high pressure developed within the young sun’s disk of gas and dust. Scientists have observed these “bumps” in ringed stellar disks around distant stars.

“If super-Earths are super-common, why don’t we have one in the solar system?” asks Dr. Izidoro, a Rice astrophysicist. “We propose that pressure bumps produced disconnected reservoirs of disk material in the inner and outer solar system and regulated how much material was available to grow planets in the inner solar system.”

“In a smooth disk, all solid particles — dust grains or boulders — should be drawn inward very quickly and lost in the star,” explains co-author Professor Andrea Isella. “One needs something to stop them in order to give them time to grow into planets.”

When particles move faster than the gas around them, they “feel a headwind and drift very quickly toward the star,” Izidoro adds.

Finally getting the size of Mars right

“ALMA is capable of taking very sharp images of young planetary systems that are still forming, and we have discovered that a lot of the protoplanetary disks in these systems are characterized by rings,” Prof. Isella says.

“The effect of the pressure bump is that it collects dust particles, and that’s why we see rings. These rings are regions where you have more dust particles than in the gaps between rings.”

Many previous solar system simulations produced versions of Mars as much as 10 times more massive than Earth. The new model correctly predicted Mars having about 10 percent of Earth’s mass.

“Mars was born in a low-mass region of the disk,” Izidoro notes.

The delayed appearance of the Sun’s middle ring in some simulations led to the formation of super-Earths, which points to the importance of timing.

Once robots make mistakes, humans kick them out of the ‘circle of trust’3 mins ago

Battle of the sexes survey: Are men or women better at saving money?46 mins ago

Once robots make mistakes, humans kick them out of the ‘circle of trust’