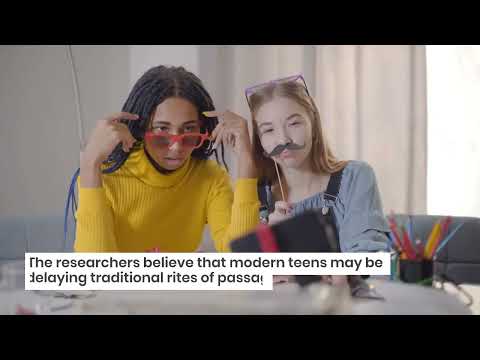 SAN DIEGO —Are our children taking more or less time to mature into adults as the world becomes increasingly digital and less reliant on face-to-face interactions? A new study finds that the current segment of teens is growing up more slowly than generations past, with kids taking their time to have sex, find a job, or even drive a car.

The surveys included information on the activities in which teens partook, allowing the researchers to examine how millennials stack up against adolescents of the 70s and beyond in terms of taking on adult responsibilities.

While teens’ tendencies were the study’s focus, external factors, such as changes in family size, life expectancy, and the economy, were also considered as being parts of the broader picture.

Ultimately, teens growing up in the 2010s were less likely to have a job, drive, date, have sex, drink alcohol, or go out without their parents than previous cohorts of teens. This finding held true regardless of one’s gender, race, socioeconomic status, region of the U.S., or whether they lived in an urban or rural area.

“In terms of adult activities, 18-year-olds now look like 15-year-olds once did,” says lead author Jean M. Twenge, professor of psychology at SDSU, in a press release by the Society for Research in Child Development.

The researchers believe that modern teens may be delaying traditional rites of passage due to a marked increase in the amount of time they spend online.

Other possible theories for abstinence, such as an increase in homework or extracurricular activities, simply weren’t the case.

“Our study suggests that teens today are taking longer to embrace both adult responsibilities (such as driving and working) and adult pleasures (such as sex and alcohol),” notes Heejung Park, the study’s co-author. “These trends are neither good nor bad, but reflect the current U.S. cultural climate.”

The full study was published Sept. 18 in the journal Child Development.

Best Strollers In 2023: Top 5 Products Most Recommended By Experts, Parents50 mins ago