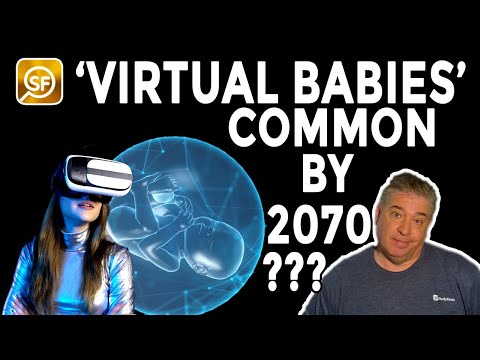 LONDON — The overpopulation crisis could be solved within 50 years thanks to the evolution of “virtual children,” one of Britain’s leading artificial intelligence experts claims. Computer-generated babies that cost about $25 a month are likely to become commonplace by the early-2070s, according to Catriona Campbell.

In addition to her expertise in AI, Campbell is also one of the UK’s top authorities in emerging and disruptive technologies, and a former UK Government adviser. She says by 2070, augmented reality (AR) and haptic “touch-sensitive” gloves will make the experience potentially “lifelike.”

By that time, up to one-in-five parents may decide to opt for a digital baby over a real one, she believes. It will create what is being dubbed the “Tamagotchi Generation” – the first cohort of environmentally-friendly digital children who will not deplete the planet of any of its natural resources. Instead, they will exist only in the virtual metaverse – a sort of 3D internet – where they will grow up in real time and come to life at the touch of a button.

How will ‘virtual parenting’ work?

Parents will see and interact with their offspring through next-generation AR glasses and haptic gloves. These devices allow users to experience a realistic sense of touch when handling virtual or holographic objects.

They will cost nothing to feed, take up no space, and remain healthy for as long as they are programmed to “live.” And they could be accessible through a Netflix-type subscription service for as little as $25 (£20) per month. While the concept might seem “unpalatable”, it represents a viable, long-term solution to birth control without preventing people from having children, according to Campbell.

An estimated 350,000 babies are already born worldwide each day, far outnumbering the number of deaths. But by the year 2100, it is estimated that the world’s total population could have exploded to 11 billion, with overcrowded mega-cities rife with crime, disease, and extreme food shortages.

A 2020 YouGov study into why couples choose not have children concludes that nearly 10 percent remain childless because of overpopulation concerns. Another10 percent choose not to start a family because of the cost of raising a child.

Campbell was recently inducted into the BIMA Digital Hall of Fame alongside Sir Tim Berners-Lee, Stephen Fry and Dragon’s Den star Steven Bartlett, for her work in human-computer interaction. Her predictions about the future of AI and its impact on humanity are detailed in her new book, AI by Design: A Plan For Living With Artificial Intelligence, which hits the shelves this week.

“Virtual children may seem like a giant leap from where we are now, but within 50 years technology will have advanced to such an extent that babies which exist in the metaverse are indistinct from those in the real world,” she says in a statement, per SWNS. “As the metaverse evolves, I can see virtual children becoming an accepted and fully embraced part of society in much of the developed world.

“Based on studies into why couples choose to remain childless, I think it would be reasonable to expect as many as 20 percent of people choosing to have an AR baby over a real one,” she continues. “This will lead to the first, fully digital demographic which, although somewhat strange on first appearance, in fact represents what could be one of mankind’s most important technological breakthroughs since the advent of the Bronze Age given its potential impact on global populations and societal change.”

Digital children will look, sound, act, and even ‘feel’ like real humans

Technology that lays virtual characters over the real world – known as augmented reality – is already hugely popular. It is a key part of the wildly popular Pokemon Go games, which superimpose cartoon monsters onto the real world through players’ smartphone screens. And a proof of concept for virtual children already exists in the form of ‘BabyX’, an ongoing experiment by New Zealand-based company Soul Machines to try and ‘humanize’ AI so that it is more appealing for the public to interact with.

At the rate AR and the metaverse is evolving, Campbell believes it is only a matter of time before it is used to create virtual children for couples that look, feel and behave exactly like the real thing. Using CGI and “advanced machine learning” – an algorithm-based technology already used by chatbots to interact autonomously with customers online – she believes these digital children will have photo-realistic faces and bodies, and will be able to recognize and respond to their parents using facial tracking and voice analysis built within an AR headset.

They will be capable of speech and simulated emotional responses – like a baby’s coo, a child’s giggle, or a teenager’s backchat – and possess a form of digital memory and other cognitive abilities.

Digital children will likely “exist” in the metaverse – a computer-generated virtual world that can be thought of as a three-dimensional internet. Here, parents will be able to interact with their children in digital environments of their choosing, such as a sitting room, park, or swimming pool.

And thanks to high-tech haptic gloves —wearable devices that reproduce sensations like grasping an object or running your hand across a surface — they will be able to cuddle, feed and play with their offspring at any time.

Campbell also believes that parents will also be able to set their “birth age” – from newborn to teenager – and choose whether they grow-up in real time or “activate” only on command. The child’s temperament and physical features, meanwhile, will likely draw on images of parents and personality quizzes to ensure they look and behave in the same way as they would if born biologically in the real world.

‘Opportunity for those who cannot have babies naturally, or cannot afford them, to still raise a child’

Campbell, who was also instrumental in the launch of Sky’s “red button” interactive services, believes digital children will become a commercial reality within 50 years and widely available on subscription-type service through a variety of specialist providers. She refers to them as the “Tamagotchi” generation because they are the “natural, evolved development” of the 1990s digital toy lived on a keychain device. The “pet” had to be nurtured by the owner, from being hatched to adult life.

Owners had to give Tamogotchis medicine when they were sick, and clean up after they’d been to the toilet. The state of the creatures’ happiness and hunger levels were indicated by meters, which had to be monitored frequently.

The “cyber tots” of tomorrow will give people the chance to “try” parenting before committing to the real thing, and will provide an opportunity for those who cannot have babies naturally, or who cannot afford them, to still raise a child. They will also be in likely demand from ethically minded consumers who want the joys of parenthood without contributing to the world’s growing population crisis.

“We’re already well on our way to creating the Tamagotchi Generation which, for all intents and purposes, will be ‘real’ to their parents. On the basis that consumer demand is there, which I think it will be, AI children will become widely available for a relatively small monthly fee,” says Cambell. “Make no mistake that this development, should it indeed take place, is a technological game-changer which, if managed correctly, could help us solve some of today’s most pressing issues, including overpopulation.”

How do you save a friendship? Researchers suggest acting more like them9 mins ago

Who wins Super Bowl LVII? Computers playing Madden NFL 23 have the answer — and the score!36 mins ago