GENEVA, Switzerland — Could joining a soccer team or taking a daily jog be the key to good grades for children? There is a correlation between a child’s cardiorespiratory health and their academic success, particularly in language and math, according to a recent study. Such intellectual qualities, including memory and concentration, may be improved by cardio exercises.

Scientists in Switzerland conducted a series of tests on students from several Geneva schools and found an indirect association between cardiovascular endurance and mental skills. Earlier work by Northeastern University Professor Charles Hillman suggests that children’s heart and lung health and academic success are linked. Hillman, who is the corresponding author of this study, write that previous research also indicated an association between cardiorespiratory wellness and enhanced executive skills.

These professional skills may be broken down into three primary categories, according to Marc Yangüez, a researcher at the University of Geneva’s Faculty of Psychology and Educational Sciences (FPSE). “The first is inhibition, i.e., our ability to inhibit intrusive or irrelevant behavior or thoughts. The second is cognitive flexibility, which is often called multitasking and refers to our ability to flexibly move between tasks or responses based on task demands. Finally, the third is working memory, which is our ability to maintain information in our minds and manipulate it,” says Yangüez in a statement.

Researchers collaborated with eight schools in the Geneva province to administer intellectual and fitness assessments to 193 students aged 8 to 12. There was a “shuttle run test” in which students had to sprint from one line to another about 20 meters away and back again at an ever-increasing rate. “Combined with height, weight, age, and sex, this test allows us to assess the child’s cardiovascular fitness,” adds Yangüez. 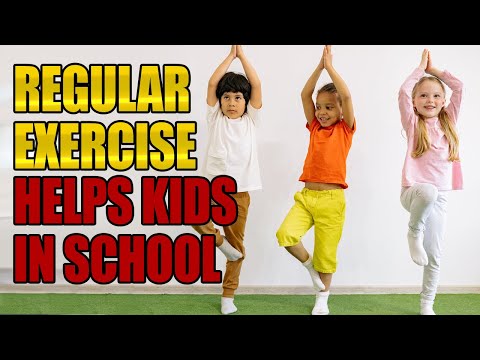 “Following this, we used nine tasks that allow us to assess children’s abilities in the three main executive functions – inhibition, cognitive flexibility, and working memory – and we measured different indicators such as the precision and speed of their responses,” adds Julien Chanal, a researcher at the FPSE.

Several tests were given to determine the students’ cognitive flexibility, one of which challenged them to link letters and numbers in a climbing sequence (for example 1-A-2-B-3-C, etc.). During one of the memory and learning assessments, students were tasked with memorizing and repeating a series of numbers that were not in any specific order, similar to a key code or phone number.

Students who were more physically fit received a higher yearly average in math and in the more advanced French 2 course. “French 1 is probably less directly concerned because the evaluation of the text and the writing depend more on subjective factors, which is less the case for mathematics or grammar, for which there is little subjectivity in the right or wrong answers,” says Yangüez.

The findings also establish a connection between heart and lung health and executive functioning skills. “By decomposing these effects via a statistical mediation model, we established that the link between cardiorespiratory fitness and academic performance was indirect. In fact, physical fitness is related to better executive functions, and it is indeed executive functions that influence school performance, more specifically cognitive flexibility,” adds Chanal.

“By demonstrating the link between physical capacities, such as cardiorespiratory capacity, cognitive abilities, and grades, it underlines the importance of not reducing physical activity (and in particular physical education hours) in favor of other subjects, as this could ultimately have a negative impact on the development of the child as a whole,” explains Yangüez. Even the assumption that students should be forced to sit at their desks for long periods of time to achieve academic success is challenged in this research.

“We would now like to carry out an intervention study into schools in different regions of Switzerland, in order to demonstrate on a large scale that when children’s weekly physical activity increases, it has a positive impact on the development of executive functions, leading to a significant improvement in school results,” concludes Chanal.

The study is published in the journal Medicine & Science in Sport & Exercise.