BRADFORD, United Kingdom — A cure for both cancer and dementia may be hiding inside an animal most people never see in the light of day. Researchers at the University of Bradford say the naked mole rat is a marvel of the biological world. They believe its DNA could contain the secrets to developing an immunity to cancer and many other degenerative conditions.

Unlike mice and normal rats, who have average lifespans of about two years, the naked mole rat lives for an astounding 40 to 50 years! Study authors find part of the their key to long life is a unique DNA repair system that prevents cancer and diseases which develop with age.

“Naked mole rats are fascinating creatures, not least because they are so long lived compared to other rodents of the same size. They also do not suffer from – what we call in humans – age associated disorders, such as cancer, dementia and neurological decline,” Professor Sherif El-Khamisy adds in a university release.

“What we’re trying to do is to understand what makes them so resistant and then to try to harness that knowledge to come up with new treatments for cancer and conditions like dementia in people. This is not about extending life but extending the quality of life.”

An immunity to cancer and pain too?

The aptly named naked mole rat is a mostly hairless animal which grows anywhere from three to 13 inches long. As pups, these creatures weigh less than a penny. 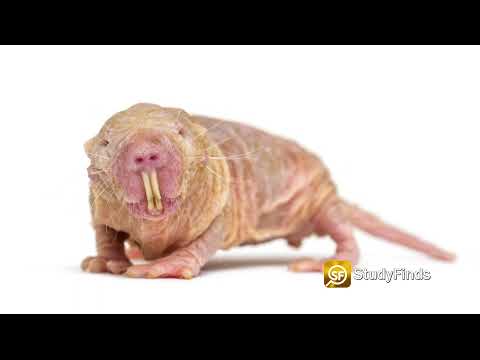 Researchers find that naked mole rats are not only immune to cancer, they also appear to be immune to feeling certain types of pain. For instance, naked mole rats are immune to the pain of insect bites and the burn of spicy plants. Interestingly, while they live most of their lives underground, naked moles rats still have a strong circadian rhythm that regulates their sleep cycles.

Researchers explain that as people age, our bodies accumulate more and more damage in the form of DNA mutations. These mutations lead to the creation of poor-functioning proteins which do more harm to our cells than good. Over time, this results in the development of age-related diseases, like dementia. Study authors believe learning how naked mole rats deal with these burdens will allow scientists to target the same biological switches in humans.

“This is a new area of research, so there are still lots of things we don’t know. For example, Alzheimer’s and dementia are caused by protein aggregations in the brain and this has been a puzzle to scientists for many years. There are questions around how those proteins form and also how the body deals with them. Clearly, naked mole rats are much better than us at dealing with them,” Prof. El-Khamisy says.

“If we can work out how they do this, we could look to adopt similar systems in humans or to use these markers as a predictive tool to be able to say ‘this person is more likely to develop dementia or cancer as they age’, and then take appropriate steps.”

The findings appear in the International Journal of Molecular Sciences.