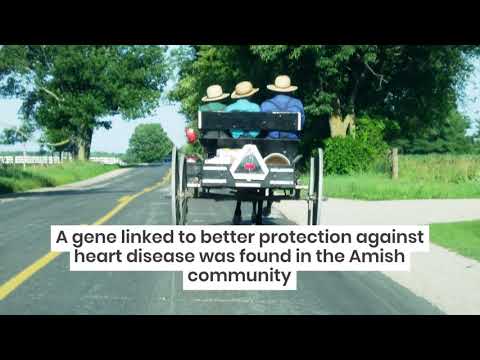 BALTIMORE, Md. — A rare gene variant, which appears much more often among members of the Amish community, may hold the key to preventing heart disease. Researchers from the University of Maryland School of Medicine say having this gene appears to lower a person’s levels of heart-damaging LDL (or “bad”) cholesterol and a blood-clotting protein called fibrinogen.

Overall, study authors say fewer than one person in 10,000 has this particular gene — B4GALT1. However, about 12 percent of those living in the Lancaster county, Pennsylvania Amish community carry the variant.

Previous studies have discovered that certain gene mutations are capable of changing a person’s cholesterol levels. Having too much bad cholesterol can lead to clogged arteries and cardiovascular disease — the leading cause of death worldwide. Researchers say this is the first time scientists have discovered a gene which lowers two different heart disease risk factors.

“Leveraging data from more than 500,000 from the general population, it was found that those who carried this variant had a 35 percent lower risk of heart disease compared to those who did not,” says study leader and UMSOM assistant professor May Montasser, PhD, in a media release. “The genetic variant appears to either control the synthesis of cholesterol and fibrinogen or accelerate their clearance from the blood, which protects the heart. This finding could lead to targeted drugs that mimic the action of this variant to keep arteries free of plaque and clots.”

The gene may lead to a treatment for heart disease

Researchers sequenced the genetic samples from nearly 7,000 Amish participants, who have been assisting the UMSOM team with genetic research since 1995. The study finds having B4GALT1 had a connection to nearly 14 mg/dL lower LDL cholesterol and 30 mg/dL lower fibrinogen.

After finding this connection, the team examined how the gene variant affected mice genetically modified to carry B4GALT1.

“The mouse model, encoding for this gene mutation, also showed decreased levels of LDL cholesterol and fibrinogen, confirming the effect of this variant,” reports study leader Giusy Della Gatta. “This model represents an invaluable tool to unravel the molecular mechanisms that help protect against cardiovascular disease.”

What makes the Amish community so different?

Researchers say the Amish population is perfect of genetic research because of their “common lineage and homogeneous lifestyle,” which they say makes it easier for finding unique links between certain genes and a person’s health.

“This is a ground-breaking finding and would not have been possible without the participation and partnership of the Amish community,” says E. Albert Reece, MD, PhD, MBA, Executive Vice President for Medical Affairs at UM Baltimore. “We are so grateful for their continuing commitment to research and advancement of precision medicine.”

The findings appear in the journal Science.

Best Places To Live In America In 2023: Top 5 Cities Most Recommended By Experts8 mins ago

What’s the safest seat on a plane? Unfortunately it’s the least popular one42 mins ago