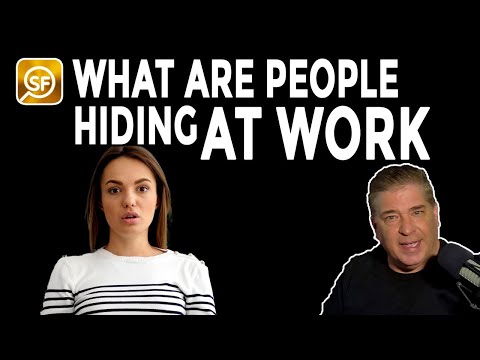 AUSTIN, Texas — Most American workers are keeping something a secret from their employer and co-workers — their “real” personality. A new survey finds 64 percent are fearful of being authentic around others in the workplace. In fact, seven in 10 say they adopt an entirely different personality when they’re at work, compared to their normal persona at home.

The poll of more than 1,900 American workers, commissioned by JobSage, also found that nearly two in three employees (64%) have experienced some sort of backlash from their colleagues when a private detail of their life became public knowledge.

Many topics are still taboo in the workplace

Although three in four people say their current employer claims to value individuality over conformity, many are simply not comfortable being themselves. The survey reveals the most common information workers hide from their employers are their political views (37%). Personal information about their family followed closely behind (36%).

One in three also hide their current relationship status, their mental health issues, and their religious beliefs from others at work. Another 29 percent say they avoid revealing their sexual orientation and 24 percent even hide a disability — even though many employment forms ask about a person’s disability status.

Half the poll (49%) say they keep all these details to themselves because they don’t want to make others uncomfortable. Another 43 percent fear that others will stereotype them, and 41 percent think the information could hurt their chances of advancing within the company. Four in 10 also fear discrimination and damaging their relationships with co-workers.

When it comes to feeling comfortable enough to be authentic in the office, one in five say they needed more than six months before they felt they could let their real personality shine through.

Different groups feel the need to hide even more

In comparison to straight and white American employees, the poll found LGBTQ+, Black, and Asian workers are all more likely to hide details about themselves from their employer.

Specifically, a staggering 85 percent of LGBTQ+ employees in the survey say they have a different personality they display while at work, compared to just 64 percent of heterosexual employees. Four in five LGBTQ+ workers admit that they hide something about themselves from their employer, with the most common thing being their sexuality (38%).

For Black employees, over half (52%) fear stereotyping and 47 percent worry that co-workers will discredit them if they reveal too much about themselves. One in four actually fear that the information they hide from an employer would lead to their firing.

One in three Asian employees feel they can’t speak candidly in the workplace out of fear of retribution. For comparison, just 19 percent of the white workers feel the same way.

Among the 64 percent of American workers who have faced retribution after revealing their “true self,” half claim their colleagues either treated them unkindly or ignored them. Another 46 percent claim their employer gave them fewer responsibilities and four in 10 claim their boss gave them more work. Does remote work solve the problem?

Does working from home allow people to be themselves? It turns out the answer is yes. More than nine in 10 (92%) say working remotely allows them to be their true, authentic self. Moreover, Americans working remotely are more likely to think their co-workers should feel free to display their piercings, tattoos, and colored hair in comparison to in-person and hybrid workers.

Many remote workers also say they’re more relaxed (61%), more productive (54%), and feel capable of freely speaking their mind (40%). Authenticity appears the key to workplace satisfaction. Respondents who feel they can be authentic at work were more likely to think their company values and trusts them.