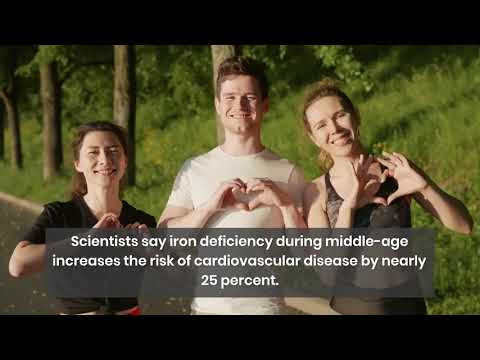 SOPHIA ANTIPOLIS, France — Eating iron-rich foods could stave off heart problems, according to new research. Scientists say iron deficiency during middle-age increases the risk of cardiovascular disease by nearly 25 percent. Eating foods rich in the vital nutrient could prevent one in ten cases of the world’s number one killer.

“This analysis suggests that if iron deficiency had been absent at baseline, about 5% of deaths, 12% of cardiovascular deaths, and 11% of new coronary heart disease diagnoses would not have occurred in the following decade,” says study lead-author Dr. Benedikt Schrage, of the University Heart and Vasculature Center in Germany, in a media release.

Over the span of 13 years, the team of researchers studied more than 12,000 older men and women from various parts of Europe. They estimated the proportion of cardiovascular events that would have been avoided if all individuals were without iron deficiency at the outset. Alarmingly, around two in three participants were lacking in the mineral that boosts blood flow, improving strength and energy.

Cardiovascular disease is the leading cause of death globally, claiming around 18 million lives annually. It is responsible for one in four of all deaths in the U.S. Previous studies have linked iron deficiency to increasing the risk of death in patients already diagnosed with cardiovascular disease. Now, for the first time, the same trend has been observed in the general population.

It raised the risk of cardiovascular mortality, coronary heart disease, and death from any cause by 26, 24, and 12 percent, respectively. This was after taking into account factors such as smoking, obesity, diabetes, and cholesterol levels. During the study period, 2,212 (18%) of the participants died, 573 (5%) from a cardiovascular cause.

“This was an observational study and we cannot conclude that iron deficiency causes heart disease,” Dr. Schrage concludes. “However, evidence is growing that there is a link and these findings provide the basis for further research to confirm the results.”

Iron deficiency is the world’s most common nutritional disorder. Iron is essential for making red blood cells, which carry oxygen around the body. If you don’t get enough, it can lead to illness and infection as well as heart and lung complications.

Symptoms of iron deficiency include tiredness, lack of energy or concentration, and shortness of breath. Women are particularly vulnerable because of menstruation, especially those with heavy periods. Women under 50 need at least 14.8mg a day to replace iron lost through menstruation. After menopause, women only need 8.7mg per day, the same amount as men.

The study is published in the journal ESC Heart Failure.