REHOVOT, Israel — Birds of a feather may flock together, but a new study finds people are more likely to gravitate towards others who smell like them! Researchers in Israel have discovered that people with similar body odors are more likely to become friends.

While dog owners don’t walk around sniffing each other like their pets do when forming friendships, the team at the Weizmann Institute of Science say a person’s sense of smell still comes into play more than previous studies have suspected.

Dogs can usually tell if an approaching canine is a friend or foe at a far distance. However, when it’s more of a mystery, our pups give each other a careful sniff before deciding to play together — or start to fight with each other. Researchers say this dominant use of smell in social interactions is a well-documented phenomenon among all land mammals — except humans.

This is because people don’t use their noses during social gatherings. Or do they?

“The results imply that, as the saying goes, there is chemistry in social chemistry,” says graduate student Inbal Ravreby in a media release.

Previous studies have found that people often become friends with people who are similar in appearance and have similar backgrounds, values, and even brain activity.

To find out how much smell comes into play when people choose their friends, study authors tested two previous observations of human behavior. First, people constantly, although subconsciously, sniff themselves. Second, people subconsciously take a whiff of the people around them.

Researchers recruited pairs of “click” friends, meaning same-sex nonromantic friends whose friendships formed very rapidly. Ravreby suspected that because these friendships formed before they really knew much about one another, their connection relies more on physiological traits — like body odor.

The team collected body odor samples from each friend and conducted two experiments, comparing the samples to body odor from a group of randomly paired individuals (strangers). In one trial, researchers used the eNose, a machine which examines the chemical signatures of odors. For the other experiment, study authors asked volunteers to smell the odor samples to see which ones they thought were similar.

In both experiments, click friends had body odors that were significantly more like each other than those of the people in random pairs.

You smell like we could be friends one day

To rule out any chance that friends smell the same because of their shared experiences — like working at the same places or eating the same foods — researchers used the eNose again to “smell” several volunteers who were all complete strangers to each other. The group then engaged in a number of nonverbal social interactions in pairs.

“These results imply that, as the saying goes, there is chemistry in social chemistry,” Ravreby says.

“This is not to say that we act like goats or shrews – humans likely rely on other, far more dominant cues in their social decision-making. Nevertheless, our study’s results do suggest that our nose plays a bigger role than previously thought in our choice of friends,” notes Prof. Noam Sobel.

The findings are published in the journal Science Advances. 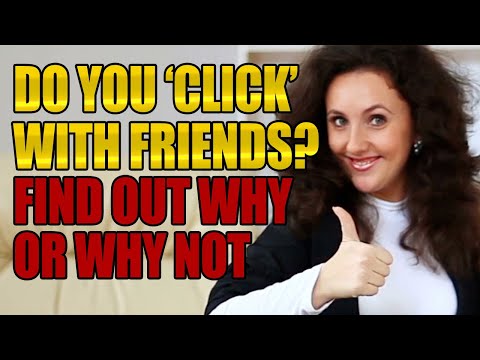