BERKELEY, Calif. — Some squirrels go a little nuts when it comes to sorting their acorns, a new study finds. Researchers at UC Berkeley observed the behavior of 45 nearby fox squirrels over a two-year period, finding that they use what’s known as a “chunking” behavior — organizing items into various smaller subsets in order to better manage the overall collection — to categorize their various nuts.

This is notable because humans also use chunking techniques, although generally for storing information, whether the data is of a spatial, linguistic, or mathematical variety. Taking your email, for example, and dividing the messages into various folders could be considered a form of chunking.

Fox squirrels use this strategy to divide the nuts they gather over a year — between 3,000 and 10,000 — into what the researchers term “subfolders,” one for each type of nut.

“This is the first demonstration of chunking in a scatter-hoarding animal, and also suggests that squirrels use flexible strategies to store food depending on how they acquire food,” says lead author Mikel Delgado in a university news release.

The researchers believe that this idiosyncratic behavior allows squirrels to both remember where specific morsels are, and to hide other treats from animals that could steal them.

“Squirrels may use chunking the same way you put away your groceries. You might put fruit on one shelf and vegetables on another. Then, when you’re looking for an onion, you only have to look in one place, not every shelf in the kitchen,” adds Lucia Jacobs, the study’s senior author. 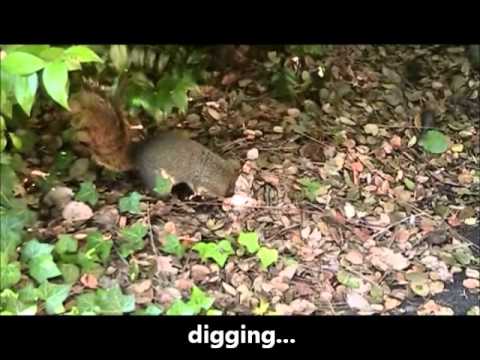 These findings were discovered through the study’s principal experiment in which the squirrels examined were subjected to a variety of conditions relating to the locations and types of nuts provided. The authors provided the squirrels with almonds, pecans, hazelnuts and walnuts and monitored via GPS tracking where on the university’s campus the critters would bury their bounty during the two-year experiment.

To determine whether the way they were being fed mattered in the experiment, the authors gave some squirrels their nuts in organized rows of fours, while others were given them in a random order. Some were fed the nuts at the site where they last buried a nut, and some were fed at a fixed location.

The rodents, regardless of where they encountered or kept their nuts, were prone to separating them, even if they did so unconsciously.

“These observations suggest that when lacking the cognitive anchor of a central food source, fox squirrels utilize a different and perhaps simpler heuristic (problem-solving approach) to simply avoid the areas where they had previously cached,” the researchers conclude.

Best Steakhouse Chains In America: Top 5 Restaurants Most Recommended For The Finest Filets7 mins ago

Entrepreneurs are often feverish workaholics. So what’s their secret to avoiding burnout?29 mins ago

Best Luggage For Kids In 2023: Top 5 Children’s Suitcases Most Recommended By Experts51 mins ago