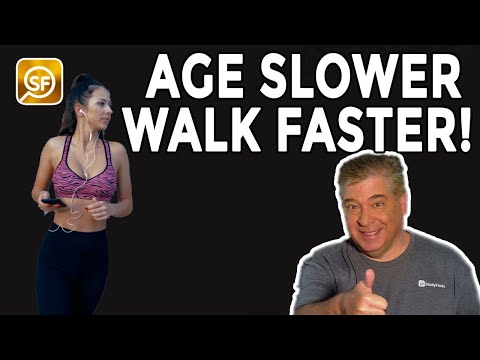 LEICESTER, United Kingdom — A brisk walk could help add 16 years to your life, a new study finds. Researchers at the University of Leicester have discovered a link between a person’s walking pace and the rate at which they age.

Specifically, a lifetime of brisk walking leads to longer telomeres. These are the protective “caps” on the ends of your chromosomes — sort of like the plastic tabs on your shoelaces. Although they don’t carry genetic information, telomeres play a vital role in keeping DNA stable.

Scientists measure these end caps to calculate a person’s biological age. The longer they are, the younger a person is in terms of biological age — which can be much different from chronological age (your birthday).

In an analysis of over 400,000 British adults from the UK Biobank, scientists found that a faster walking pace throughout life could lead to a person being 16 years younger in terms of biological age by the time they reach midlife. Importantly, the team found brisk walking alone, regardless of how much physical activity that person engages in, leads to longer telomeres.

Researchers explain that each time a cell divides, telomeres become shorter. At a certain point, telomeres get so short that the cell no longer divides. Although the link between telomere length and disease is still unclear, scientists say the buildup of senescent (elderly and dying) cells contributes to the development of age-related diseases and frailty.

Previous studies have shown how walking can provide physical, mental, and social benefits. However, the team says this is the first time scientists have compared walking speed with genetic data tied to longevity.

“Previous research on associations between walking pace, physical activity and telomere length has been limited by inconsistent findings and a lack of high-quality data,” says lead author Dr. Paddy Dempsey in a university release.

“This suggests measures such as a habitually slower walking speed are a simple way of identifying people at greater risk of chronic disease or unhealthy aging, and that activity intensity may play an important role in optimizing interventions. For example, in addition to increasing overall walking, those who are able could aim to increase the number of steps completed in a given time (e.g. by walking faster to the bus stop). However, this requires further investigation.”

A quick walk around the block could add decades to your life!

Leicester researchers have previously found that as little as 10 minutes of brisk walking each day can contribute to a longer life. These individuals had a life expectancy up to 20 years longer than their slower walking peers.

The team in this study notes that they did not find a link between walking slower and telomere length growing shorter.

“Whilst we have previously shown that walking pace is a very strong predictor of health status, we have not been able to confirm that adopting a brisk walking pace actually causes better health. In this study we used information contained in people’s genetic profile to show that a faster walking pace is indeed likely to lead to a younger biological age as measured by telomeres,” concludes Tom Yates, senior author and Professor of Physical Activity, Sedentary Behavior and Health at the University of Leicester.