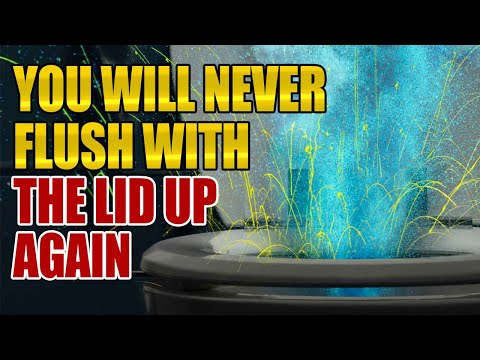 NEW YORK — If you’ve ever been struck by a water droplet after flushing the toilet, it can certainly gross you out. Now imagine that feeling multiplied by a thousand! New images of what’s really happening when you flush the toilet is giving nearly everyone in a survey incentive to close the lid.

A poll of 2,000 adults in the United Kingdom finds 55 percent don’t put the toilet lid down when flushing. This comes despite nearly three in four people (72%) saying they’re more focused on cleanliness and hygiene than ever before.

The OnePoll study, commissioned by Harpic, warns that toilet bowl water is still contaminated with potentially harmful bacteria and pathogens even after several flushes. To prove their point, researchers took slow motion images with a specialized camera to capture the aerosols, droplets, and germs flying out of the bowl when someone flushes without closing the lid. The pictures reveal how the backfire from a toilet flush can spread nearly invisible aerosol droplets to nearby surfaces and even into the faces of people using the restroom.

“There has never been a more important time to take extra care around our homes, although the risks associated with germ spread in unhygienic bathrooms are high, the solution to keeping them clean is simple,” a research and development associate at Harpic says in a statement.

Keeping a lid on germs

When asked why they’re not closing their toilet lids, 47 percent of respondents said they were unaware of the health risks tied to flushing. One in four said they fear touching toilet bowl lids and 15 percent added they just forget to do it. After seeing the images of what’s really happening every time you flush however, 95 percent promised to change their ways.

The coronavirus pandemic has also motivated more adults to keep their bathrooms clean. Over the last six months, nearly half (49%) are cleaning their toilets more often. Another 45 percent are frequently giving their bathrooms a deep cleaning and 44 percent are mopping their floors during quarantine.

Harpic recommends three key things people can do to keep their bathrooms clean and themselves healthy:

“We hope our new #CloseTheLid campaign helps inspire people to make simple changes to their cleaning routine that can have long-lasting benefits to the health of the nation,” the Harpic spokesperson says.

Previous research has pointed to the dangers of germ spread by a toilet that’s been flushed. A report in the journal Physics of Fluids uncovers a similar result for men who use a urinal. Simulations find a urinal’s flushes are much more “violent” and aerosols reach users in a fraction of the time.

Particles coming from a urinal flush “manifests an external spread type, with more than 57% of the particles traveling away from the urinal,” according to that study’s author. The spray hits urinal users in the thigh in just 5.5 seconds, that study shows. Spray from a normal toilet reaches higher than the thigh, but it takes about 35 seconds to hit a person.

A similar study also warns that toilets could even spread the coronavirus, since research shows the virus is found in human waste. For the study, researchers created computational models to track the spread of aerosols. The model shows that the droplets fly about three feet above the bowl, and they can stay in the air for about a minute since they are so small.

This article was first published on November 3, 2020.

Could algae help to cure the common cold?4 hours ago

Best Of The Best Hair Gels: Top 5 Sculpting Products Most Recommended By Experts10 mins ago

Presidential Tweets reveal when politicians get nasty, many voters tune out14 mins ago

Best Of The Best Soccer Balls In 2023: Top 5 Products Most Recommended By Experts3 hours ago