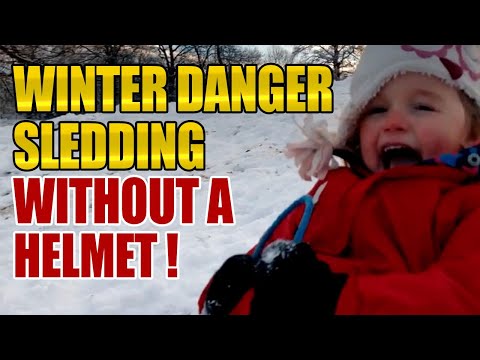 ANN ARBOR, Mich. — Sledding may not be as dangerous as some other winter sports, but does that mean kids don’t need a helmet? According to a new survey, that’s what most parents think. Researchers at Michigan Medicine find that nearly 70 percent of parents admit their kids never wear a helmet while sledding.

Despite the potential for injury that comes with sledding downhill, the poll reveals parents are far less likely in general to discuss sledding safety rules with their kids in comparison to other winter sports and activities.

Additionally, the University of Michigan Health C.S. Mott Children’s Hospital National Poll on Children’s Health also reports only three-quarters of respondents consistently ensure their children wear a helmet while skiing or snowboarding. Researchers surveyed a total of 1,992 parents from all over the United States in October 2021. All of the parents have at least one child between ages three and 18.

“Activities like sledding and skiing offer families an exciting way to enjoy the winter months outdoors,” says Mott Poll co-director Sarah Clark, M.P.H., in a university release. “But parents are responsible for taking the right steps to minimize injury risks for their children.”

Three in four parents in the poll say their children will see snow this winter, either through living in an area that gets annual snowfall, or by visiting a snowy location while on vacation. As for which snowy activities their children will engage in, parents say sledding is the most popular thing to do.

Sledding doesn’t usually have a reputation for being a super dangerous activity, but researchers say it actually results in an incredible number of injuries each year. Consider these numbers: between 2008 and 2017, there were 220,488 patients treated in U.S. emergency departments for sledding-related injuries. Just under 70 percent of those patients were younger than 19.

Despite the risk of injury, most parents simply don’t see sledding as all that dangerous. Among survey respondents, one in six parents totally avoid discussing safety rules about sledding with their kids.

“Because sledding is so common, parents may overlook important safety concerns,” Clark explains. “However, to avoid injuries, parents should ensure the sledding area is free of trees or other objects and has a flat runoff area at the bottom of the hill. Parents should also make sure children understand strategies to avoid collisions with other sledders.”

Study author believe head trauma should be a parent’s biggest concern when it comes to sledding safety, which is why they say their findings are so puzzling. They hope, however, that this trend changes in the near future. Currently, the American Academy of Pediatrics recommends all children wear a helmet while sledding.

“Very young children need supervision at all times during winter sports activities, either from a parent or another trusted adult,” Clark concludes. “This allows parents to ensure children are following safety rules, and to decide to leave if the area is getting too crowded or if other people are acting unsafely.”

For older adolescents, study authors advise parents to use their best judgment. At the very least, they recommend that everyone should always have a cell phone with them while engaging in winter sports.