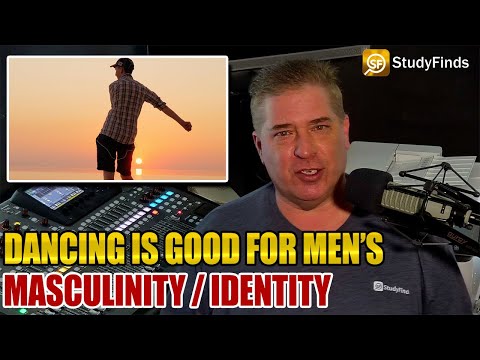 HELISINKI, Finland — It’s time for men to get footloose and bust a move. A new study finds dancing is good for masculinity and helps them better understand their own identity.

Popular shows such as “Strictly Come Dancing” and “Billy Elliot” have played major roles in ending the idea that strutting your stuff on the dancefloor is an effeminate pastime. Now, academics in Finland set out to discover what impact dancing during childhood has on men in adulthood.

The research team conducted a survey of men who took part in boy’s dance groups between the 1990s and 2008. Interviewees said dancing was a good way of expressing themselves physically and made them more positive about their bodies. It also helped them grow more confident discussing life’s important questions.

The sport also made them more aware of their bodies and made them capable of reading other people’s body language. Additionally, a dancefloor session helped them understand the concept of being different and helped them co-operate with different kinds of people. One dancer adds the hobby “saved him” from having a narrow outlook on life.

Participants note they could express themselves in class, in an environment which allowed them to be very different from who they were as teenagers or in school. The participants also accepted rather than frowned upon the diversity of bodies in the class.

Men often try to hide their love of dance

Many of the men taking part in the study call dance class a “family or community” which they felt they belonged to. The boy’s locker room was a place they felt they could talk about their experiences and share their views on sexuality, whether they were straight or not. However, many of the men stopped dancing at some point in their youth because of stigma.

Sadly, many of them found their experience of giving up dancing “traumatic.” Many were too embarrassed to tell schoolfriends they danced and hiding their hobby became a “survival strategy.” Pressure from friends rather than parents was almost always their reason for giving up the activity.

The researchers say attitudes towards gender roles have become more flexible in recent years, but men and boys are still outnumbered by women in dance classes. Many cultures have very different attitudes to theatrical and performance dance as opposed to participatory dance.

Study authors say partner dance and folk dance are generally more acceptable for men, while ballet, jazz, and contemporary dancers’ sexualities face more scrutiny. The researchers say in participatory dance, men’s bodies are the subject of the audience’s gaze, a role that is traditionally reserved for women.

Society continues to become more accepting of men in dance

In Finland, the dance scene began emphasizing the masculinity of male dancers in the 1950s. As recently as the 1980s, dancers were compared to top athletes and performed martial arts moves as part of their routines. During the 21st century, people started to accept a broader definition of masculinity.

“Many of the interviewees pointed out that dancing is a way to express oneself physically without competition or measuring the performance. Dance served as an outlet for discussing the important questions in life,” says study author Dr. Kai Lehikoinen in a university release.

“Body awareness is part of humanity, and we increase our knowledge of the world through our senses. If people ignore the bodily dimension of themselves, it reflects negatively on their wellbeing. Everyone has equal rights to develop their own body awareness. That’s why men should get to dance, too.”

“Dance teaching should support teenagers’ growth as human beings. A teaching method that is based on respect for people and a dialogue with others is beneficial for a group’s sense of community, as well,” Lehikoinen notes. “There should be research into why basic education in the arts has usually attracted girls significantly more than boys. Doesn’t teaching in the arts take different kinds of learners into sufficient consideration? In our article, we emphasize gender sensitivity instead of gender neutrality. For example, this means that we question traditional, narrow gender roles and embrace diversity.”

“Right now I teach a group with ten boys at the age of 7 and 8. The group was filled fast, and some kids were even placed on a waiting list,” says study author Isto Turpeinen, a visiting researcher at the University of the Arts Helsinki. “In practice, most dance groups are made up exclusively of girls, so teachers design their classes for girls’ bodies. Boys feel that the teaching is not suited for them. Sometimes boys are left alone, and they don’t get to have that shared locker room experience and the sense of community that comes with it.”

“Everyone in my group can choose to define themselves as boys, and I don’t limit anyone’s right to participate based on their biological sex,” Turpeinen, who is also a dance teacher, continues.

“My goal is to make sure that all those who have interest also have the possibility to dance and that diversity is genuinely taken into consideration in dance education. We have an exceptionally wonderful basic education system in dance here in Finland, and I hope that boys and men, too, would find dance education a suitable option for them.”

The findings are published in the book Masculinity, Intersectionality and Identity, Why Boys (Don’t) Dance.