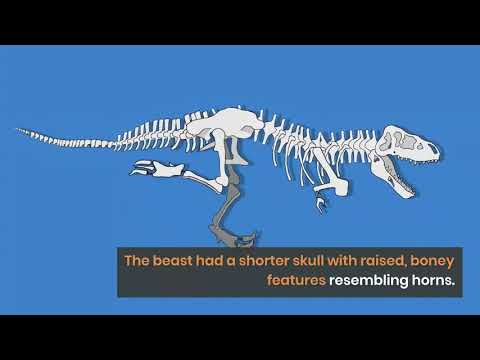 PATAGONIA, Argentina — Could there have been a dinosaur even more ferocious than the feared Tyrannosaurus rex? Scientists recently discovered a new species of dinosaur, dubbed Llukalkan aliocranianus. Although not as large as T. rex, the 16-foot carnivore had a similar body structure and possibly better hearing.

The beast had a shorter skull with raised, boney features resembling horns. This inspired its species name aliocranianus, meaning “different skull.” Sharp teeth, strong legs, and an extraordinary sense of smell made it especially good at catching prey. Distinct to this particular species, however, is the structure of the inner ear, unlike any other therapods in the abelisaurid family.

Abelisauridae were a remarkable family of dinosaurs, ranging in size from 16 to 30 feet long. They lived mostly in Argentina (formerly Patagonia) approximately 145 to 66 million years ago. Nearly ten species of Abelisauridae have been discovered in Argentina so far. Their remains have also been found in areas of Antarctica, Africa, South America, and Australia.

While the Llukalkan resembled the T. rex physically, according to well-preserved skull features, it had a tiny cavity behind the center region of the inner ear that was filled with air. This most likely gave the species a more profound sense of hearing, making it the apex species of its time and justifying its genus name Llukalkan, meaning “one who causes fear.”

“It means that Llukalkan likely heard differently to other abelisaurids – most probably better and similar to that of a modern-day crocodile,” explains co-author Dr. Ariel Mendez from the Patagonian Institute of Geology and Palaeontology, in a statement. “This finding implies a different hearing adaptation from other abelisaurids, and likely a keener sense of hearing.”

Although it lived in the Cretaceous period when T. rex roamed the Earth, T. rex and Llukalkan most likely never came in contact with each other since they lived in different hemispheres. Llukalkan did however live alongside the Viavenator exxoni. Belonging to the same family, the Viaventaor had similar characteristics, but seem to lack the unique ear structures. Scientists exhumed fossils of both of these species within 765 yards of one another in Argentina’s Bajo de la Carpa Formation.

“This is a particularly important discovery because it suggests that the diversity and abundance of abelisaurids were remarkable, not only across Patagonia but also in more local areas during the dinosaurs’ twilight period,” says Dr. Federico Gianechini, a paleontologist at the National University of San Luis, Argentina, and the study’s lead author.

Aside from the remarkable ear structures found in Llukalkan, the remains show large claws in the feet most likely used to kill prey. Also, the foramina or holes in the skull were wider which may have allowed for increased blood flow to the brain. These findings suggest this family of dinosaurs was still adapting and thriving up until their extinction. “These dinosaurs were still trying out new evolutionary pathways and rapidly diversifying right before they died out completely,” adds Mendez.

“This discovery also suggests that there are likely more abelisaurid out there that we just haven’t found yet, so we will be looking for other new species and a better understanding of the relationship among furilesaurs,” says Gianechini.

This study is published in the peer-reviewed Journal of Vertebrate Paleontology.

Best Women’s Hairstyles In 2023: Top 5 Trending Cuts Most Recommended By Stylists 23 mins ago