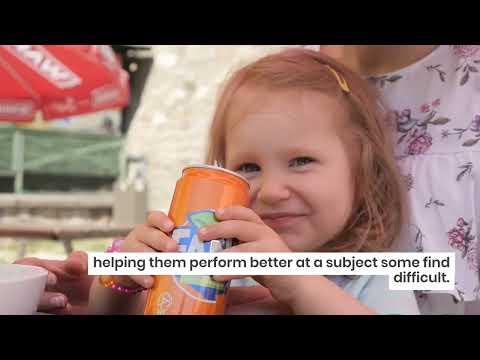 LEUVEN, Belgium — Sugary drinks have come under scrutiny for their link to unhealthy lifestyles and obesity — especially among kids. Although a new study finds this may still be the case with young boys, the report also discovered that girls may actually benefit in the classroom from a glass of soda.

Researchers from KU Leuven say having sugary or artificially sweetened drinks did not affect the classroom behavior of young girls — who also saw their math test scores slightly improve.

According to the findings, the sugar rush improves numerical skills among preschool girls, but had the opposite effect on boys. Sugary beverages may relieve stress in girls, researchers say, helping them perform better at a subject some find difficult.

As for young boys, the study finds consuming sugary drinks made them more restless — after an initial “relaxing effect.” Researchers did not note any changes in the behavior of girls during the study. The findings come from an experiment involving 462 Belgian children between four and six years-old.

“The associated effects on in-class performance have major policy implications, as sugary drinks are still ubiquitously sold in schools and as the consumption of sugary drinks is typically higher among children from low-income households and among boys,” says study co-author Professor Kristof De Witte in a media release.

The team analyzed each participant’s behavior and test scores before and after they drank a sugary or artificially sweetened drink.

Does soda act as a stress reliever?

The results among preschoolers reveal new insights into the short term effects these beverages have on classroom performance. Previous studies point to sugary drinks as one of the main causes of childhood obesity. Another study has even linked them to the development of attention deficit hyperactivity disorder (ADHD) and other mental health conditions.

However, the analysis in the journal Health Economics is the first to identify their impact on student achievement.

Among boys, results show consuming one sugary drink (equivalent to a can of soda) decreased math scores by 26 percent. Conversely, math scores soared by almost 29 percent among young girls.

Dr. Schiltz says the relationship between sugar, stress, and mathematics provides a “plausible explanation.” Math make girls more anxious, the team claims. In women, sugar has been found to reduce levels of the stress hormone cortisol while they calculate equations.

“Although no evidence is available for preschool children, differential reductions in cortisol levels among boys and girls following the consumption of a sugary drink offers a plausible explanation for our findings,” the researchers write in a university release.

Are poorer at higher risk from sugary drinks?

Study authors add that this phenomenon may also be a factor in poorer exam results for boys in comparison to girls.

“It is a widely held belief that the consumption of sugary drinks causes children to experience a ‘sugar rush,'” the team continues. “Our results indicate that boys significantly decrease their mathematics test scores after drinking a sugary drink, compared to boys who received a placebo. We find the opposite effect for girls.”

“Our results suggest that the detrimental and persisting effects on boys’ test scores and teachers’ classrooms are unlikely outweighed by a marginal increase in resources from selling sugary drinks at school.”

“Moreover, from a societal point of view, our results should be viewed in light of the skewed consumption pattern of sugary drinks by sex and socio-economic status, and the harmful effects on children’s lives in terms of weight gain and obesity rates.”

Public health experts have proposed a ban on vending machines in schools, reducing children’s exposure to advertisements, and sugar taxes in an attempt to curb sugar consumption.

“Sound evidence on the impact of sugary drinks in a class-context can feed the discussion on dietary guidelines for schools, taxes on sugar and the potential cost of vending machines in schools,” the Belgian researchers conclude. “Taking into account the higher intake of sugar among disadvantaged boys, our results could provide a partial explanation for the observed underperformance of boys in low socio-economic status groups.”