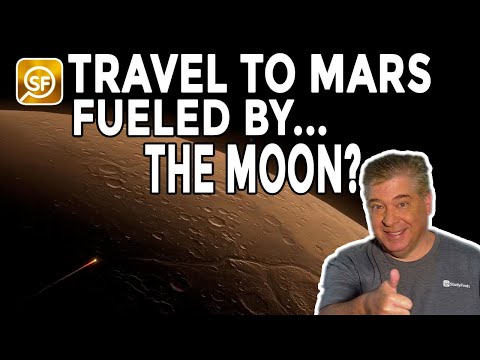 NANJING, China — Soil from the moon could one day be turned into rocket fuel to power missions to Mars, according to new research. It offers hope of a “lunar village” that would include a launch pad and mining operations.

The moon is a treasure trove of valuable resources. Gold, platinum and other rare metals for next-generation electronics are awaiting extraction. Analysis of coarse and jagged dirt granules brought back by China’s Chang’e 5 spacecraft found it contains compounds that convert carbon dioxide into oxygen. They are rich in iron and titanium that work as catalysts under sunlight. Liquified oxygen and hydrogen makes rocket fuel.

Scientists say a moon base would make spacecrafts much lighter and cheaper. Earth’s atmosphere and gravitational pull mean tons of fuel per second are needed for lift-off.

“We use in-situ environmental resources to minimize rocket payload. Our strategy provides a scenario for a sustainable and affordable extra-terrestrial living environment,” says lead author Yingfang Yao, of Nanjing University, in a statement.

The findings open the door to a cost-cutting interplanetary gas station on the moon for trips to the Red Planet and beyond. The Chinese team propose a technique called “extra-terrestrial photosynthesis.” It takes advantage of lunar soil and solar radiation – the moon’s two most abundant resources.

The system turns water extracted from the moon and in astronauts’ breathing exhaust into oxygen and hydrogen, using the power of sunlight. CO2 exhaled by moon inhabitants is also collected and combined with hydrogen from water and catalysed by lunar soil.

The process yields hydrocarbons such as methane – which could be used as fuel. Sunlight produces water, oxygen and fuel that could support life on a moonbase.

China’s future crewed lunar missions are set to test the renewable energy method known as electrolysis. Yao says different approaches are being tried to improve the design, such as melting the soil into a nano-structured material. Previous ideas have required energy sources from Earth. NASA’s Perseverance Mars rover has an instrument that makes oxygen out of CO2. But it is powered by a nuclear battery onboard.

“In the near future, we will see the crewed spaceflight industry developing rapidly. Just like the ‘Age of Sail’ in the 1600s when hundreds of ships head to the sea, we will enter an ‘Age of Space,'” adds Yao. “But if we want to carry out large-scale exploration of the extra-terrestrial world, we will need to think of ways to reduce payload, meaning relying on as little supplies from Earth as possible and using extra-terrestrial resources instead.”

NASA’s ambitious Artemis project plans a lunar base by 2028, along with a lunar space station called Gateway to facilitate trips to Mars. China is hoping to win the race to Mars by landing the first human on it within the next 10 years.

The study is published in the journal Joule.

Best Women’s Sunglasses In 2023: Top 5 Shades Most Recommended By Experts34 mins ago